The sky still Gray and temperatures not above 20 – not the best requirements for a trip up north. The forecast: more rain and temperatures from 5 – 15 degrees around Sapa. And I want to go further north than Sapa. Looks like I have to change the plan.
Scott was on the way up from Saigon to Hanoi so I decided to meet him in Hanoi. He was not sure if he comes with me on a bike or flies back to Bankok for some celebration with Tailek on Sunday. 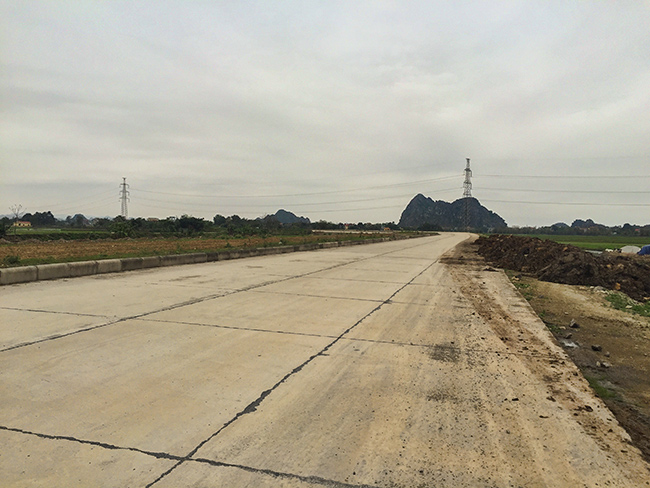 The road to Hanoi – for the first 50 km traffic was like that. As soon as you hit the A1 it gets crazy 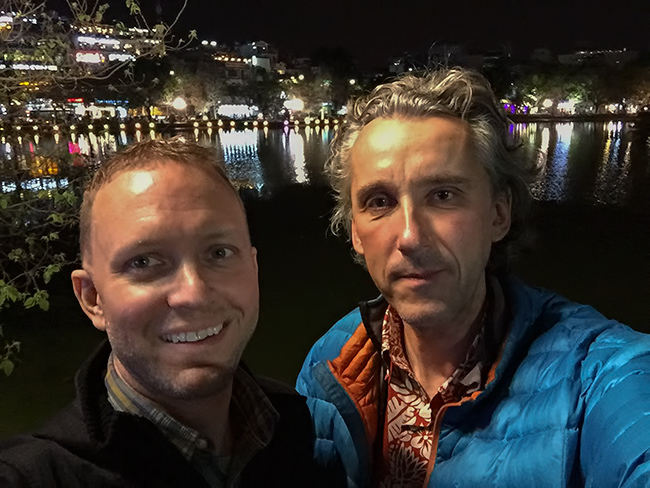 Scott had a double room and we did meet round the corner of my old place. The North Hotel was full :-(
Did circle the lake, had some “we want to improve our English” conversation, watched an action flick in the cinema and tried to find a place that serves Egg Coffee since Scott never had one. 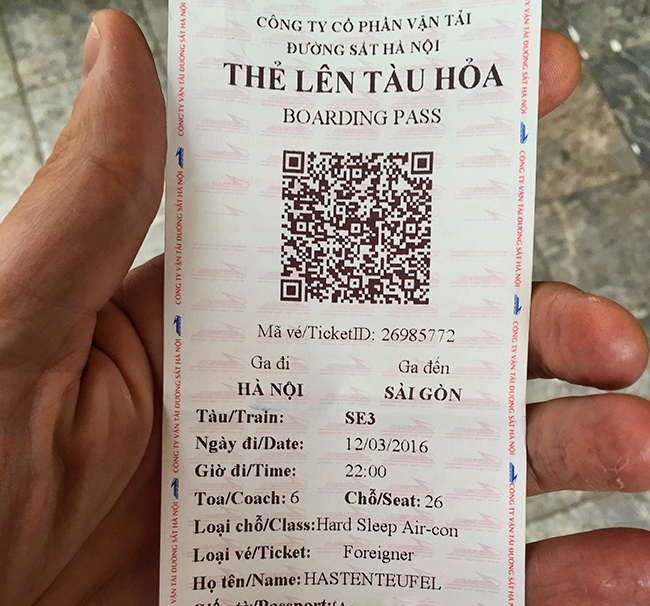 Scott decided to fly to Bangkok so I was alone and had to decide – stay in the north of Vietnam? Drive down south? Or take the train all the way down and see some friends on the way up?? The train down it was! 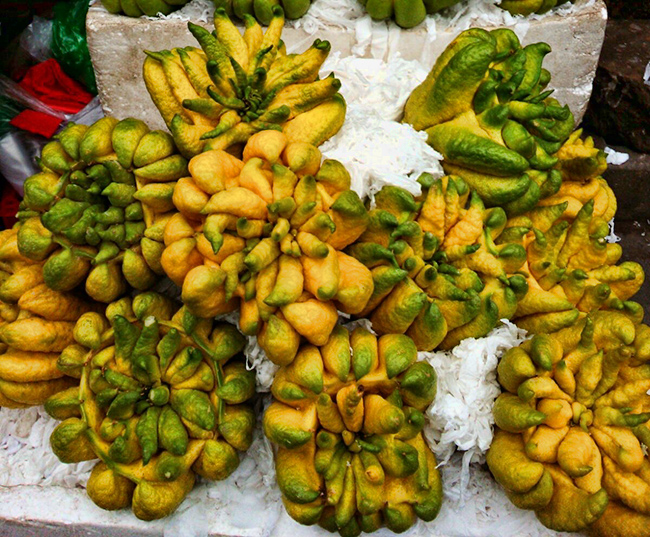 Buddha’s hand – guess I was never in the season for it over here? Or did I forget them? Strange! 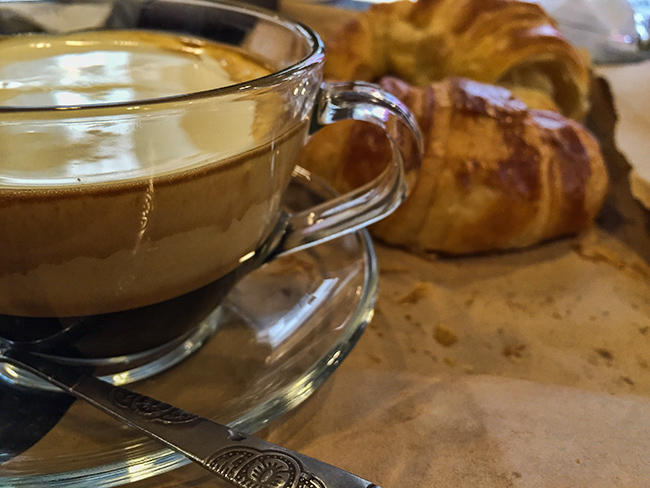 Got up early and went to the bakery. Scott does sleep long but finally, we could go and we did find that Egg Coffee! Quite expensive and way to sweet but one time you have to try it! 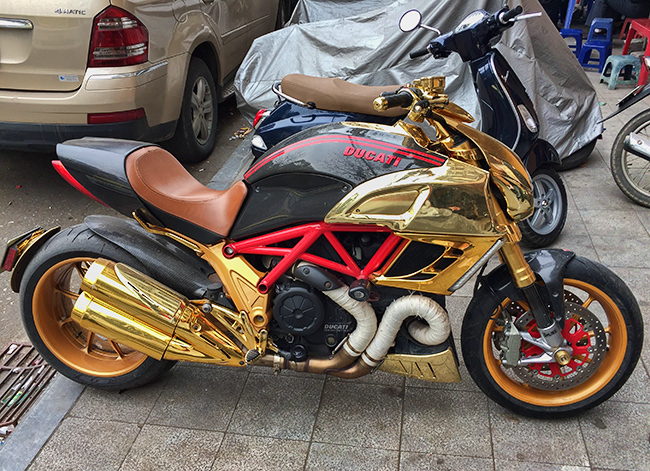 How ugly is that? 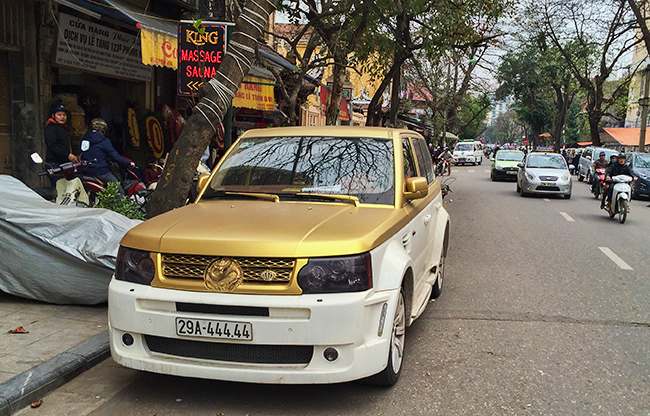 And look what the guy did to his Range Rover :-( Must be the owner of the King Massage 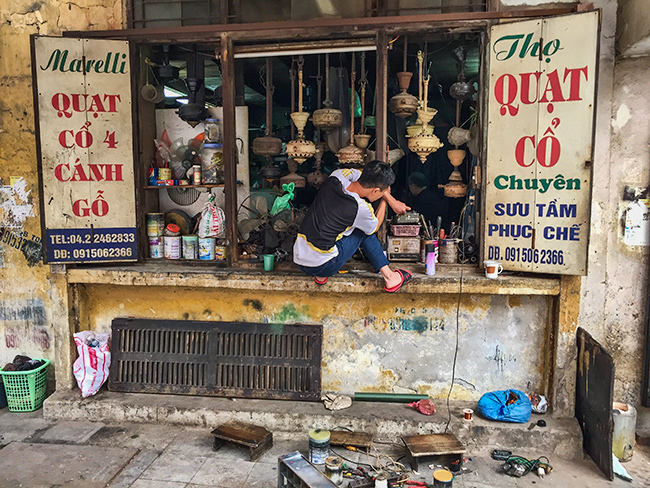 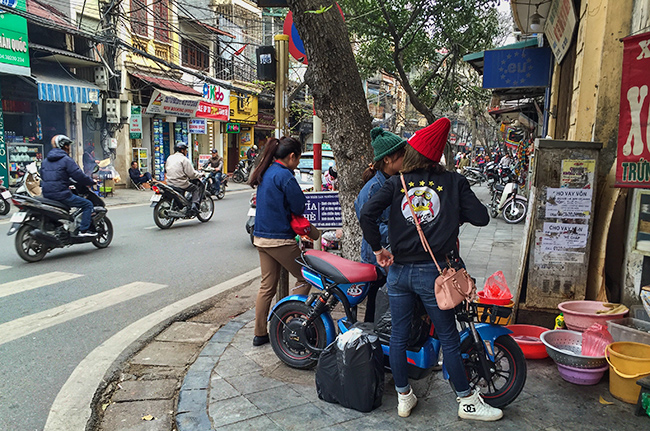 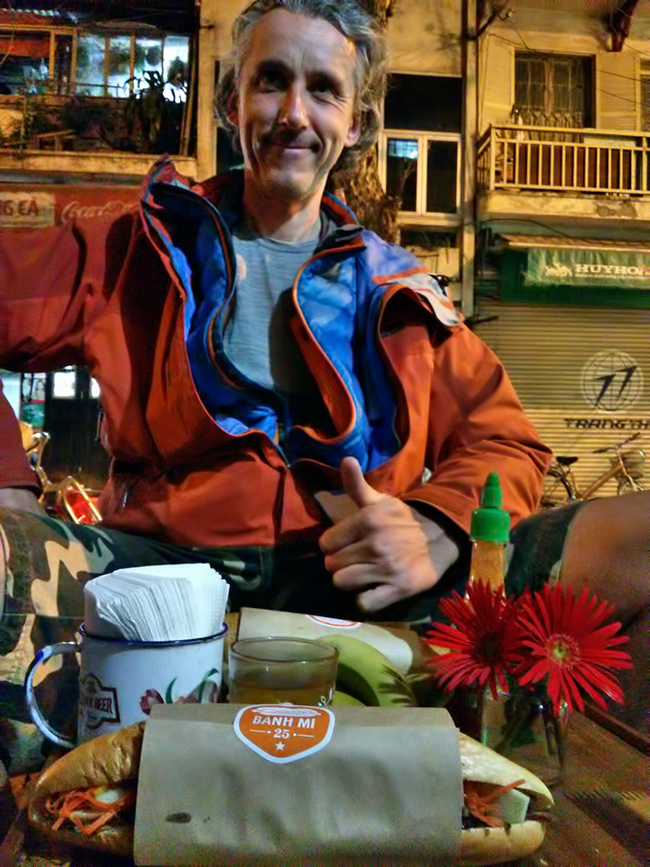 The famous Banh Mi 25. I had better but they give you free tea and bananas! Cool. And we came late so the bread was not really fresh anymore – should try that in the morning again. 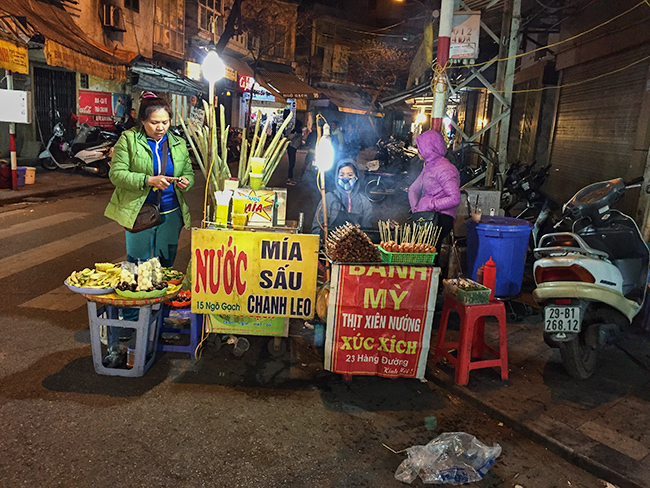 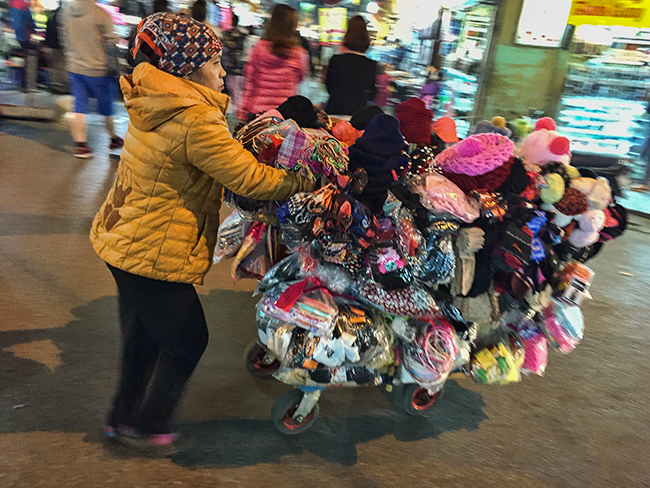 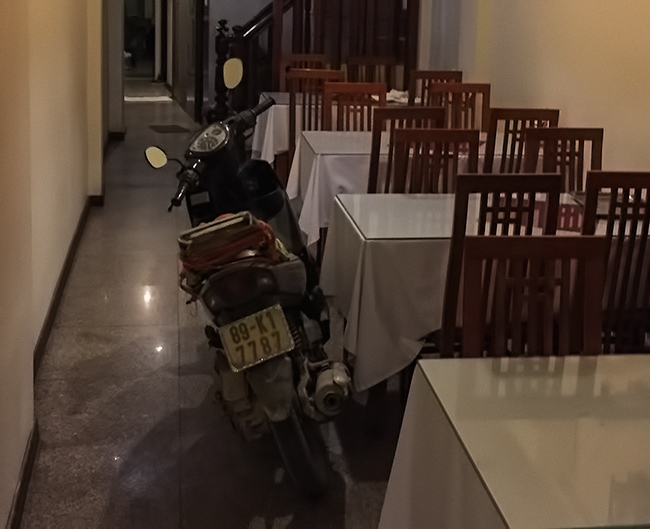 In most of the Hotels in the cities, they do park your bike inside at night. Even inside the breakfast room! 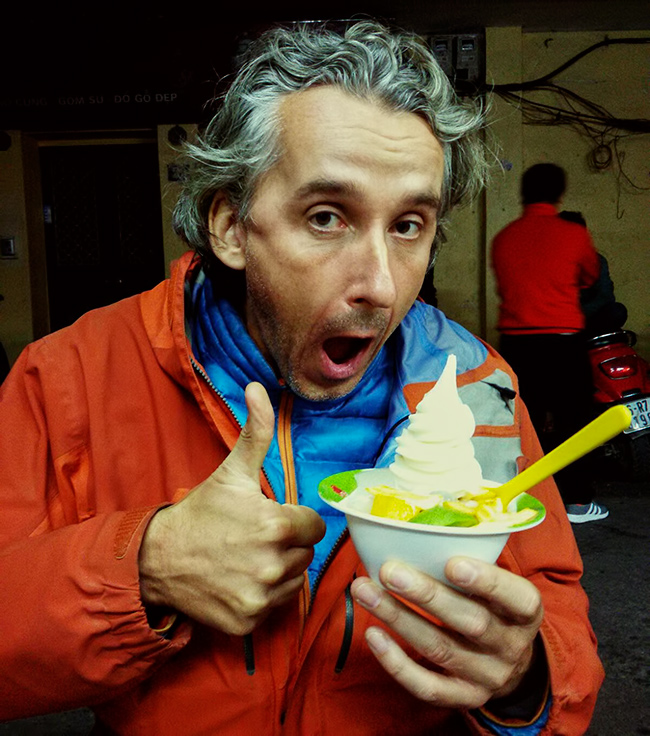 Ice cream in the Dessert Street – that was Scotts ice – I do not dig the sweets that much. But I gave it a try and it was good! 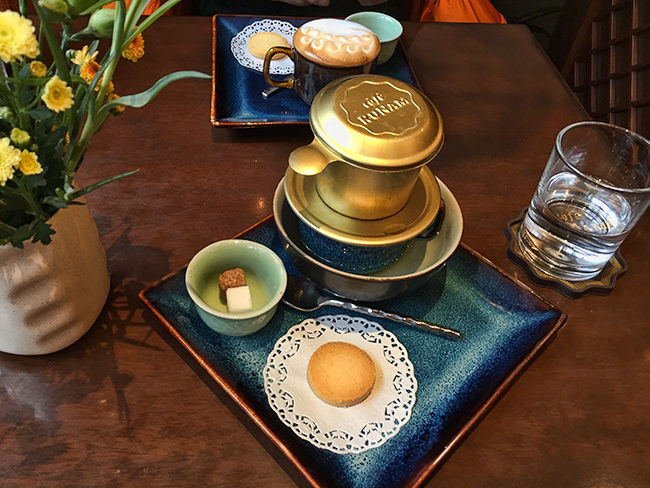 Expensive coffee – nicely done but in the end, it was cold :-( Every time Scott does treat me to coffee it is cold? 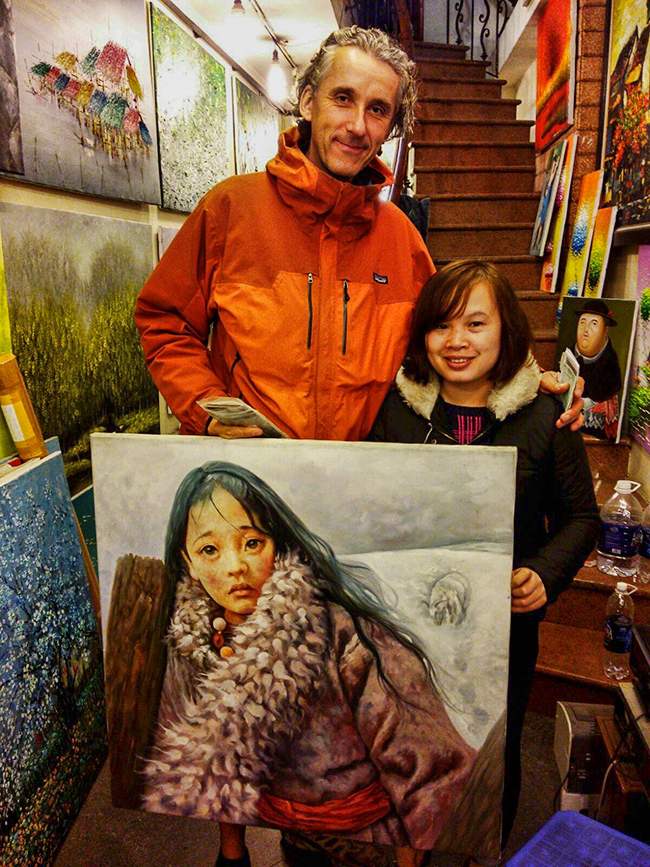 Got that picture – Scott was the man for the hard bargain part and in the end, I gave him 1000 Thai Bath for it. Will pick it up at the end of the trip. 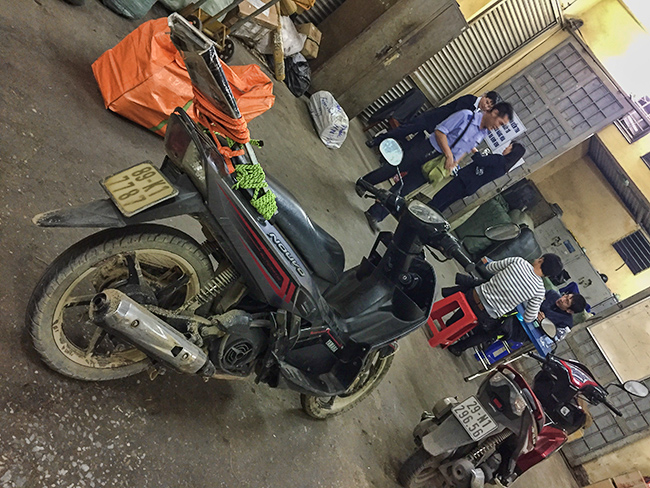 The girl who sold me the train ticket told me it would be no problem to take the bike on the train. So we went 2 hours before departure to the station. Well well – I was on the Express! No, the bike can not go on that train. We ship it with the next train – tomorrow. WTF! Did book a place about 12 km outside of the center – that will be not nice without the bike. This picture was taken in the place where you go and arrange the transport at the train station in Hanoi. And that is a nice story altogether: You arrive at the station – of course on the wrong side. So one guy runs and starts to take out the gasoline since the bike has to be empty. Not a lot left so he was too. Then he sends me to the gate and Scott did stay with the bag. I find a woman who told me I am at the wrong station. Then she phones somebody and tells me to come with her. Got Scott and the bag and we moved over all the tracks to the other side of the station and to the place you see at the picture above. You have to fill out 2 forms, they tell me the bike is very old so I have to put that on the form. Scratches here and there – put on the form. Very dirty your bike – put that on the form as well. Quite funny. Then you go to the “office” next door and pay at the counter. While Scott and the guy that works there compare their weight on a big scale. And their height and age. Somehow they do count different here – as far as we understood they get born and are 1-year-old since there is nothing like 0 years. Does make sense somehow…
Finally, everything was done – more forms to fill and the money was handed over. Time to go and get some water and beer for the night. 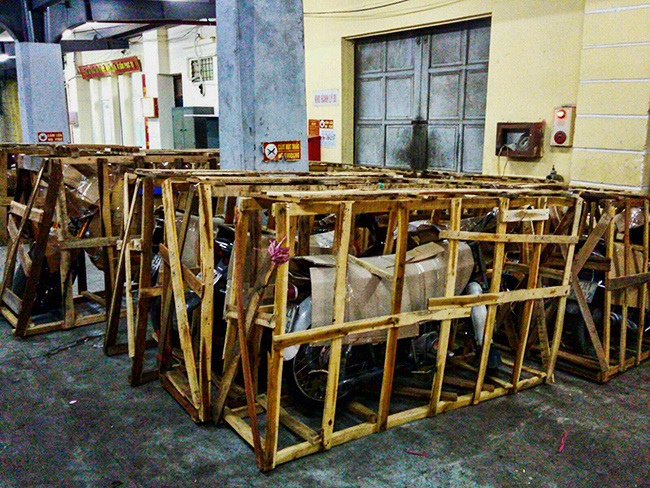 Bike transport boxes at the train station in Hanoi – No clue why you need such a stupid box round the bike but it is Vietnam and what can you do? Handling, box building, and transportation: 25€ for the bike 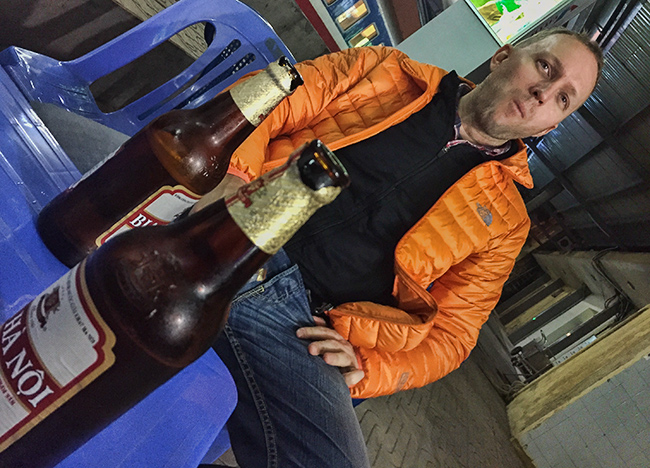 Turns out that all the doors were shut so we could see the passengers in the waiting room but we could not get out to look for a shop. There was a little shop open on our side of the station and we did take a seat over there. She wanted way too much for the beer so I had to talk her down. To celebrate even Scott had a beer with me. Than more bargaining for the night’s bottles and the water to bring to the train. 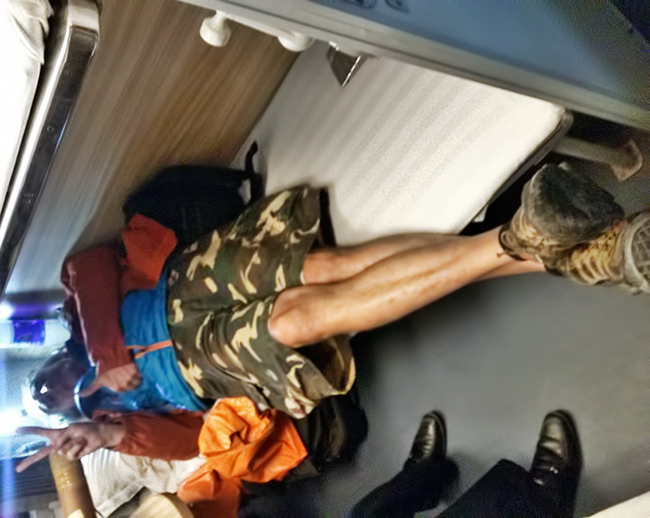 My bed for the next 30 hours and my seat as well. Boy – I do not really look forward for this trip!

Support my blog!
Book your room here please. No difference for you but I get a little bit of Coffee money :-) Thank you!