Had a good rest at the Ly Ha Hotel in Phố Châu. Since I had a kettle I could make some coffee in the morning. How nice if you do not have to leave the room and have a cup of coffee before you take your shower. After shower and Pack the Bag Game it was time to strap the bag on the bike.
Downstairs where two more guys with bikes on their way down to Saigon. And the son of the owner as well and he could speak English.
My bike did refuse to start and I had to kick-start it. It was not happy and after 5 minutes I was not happy as well. It was over 30 now and quite humid. I started to sweat! So down with the bag and walk the bike to a shop – but give it one more try before. There – it did start. Up with the bag again and the friend of the son drove with me to the next Yamaha shop. 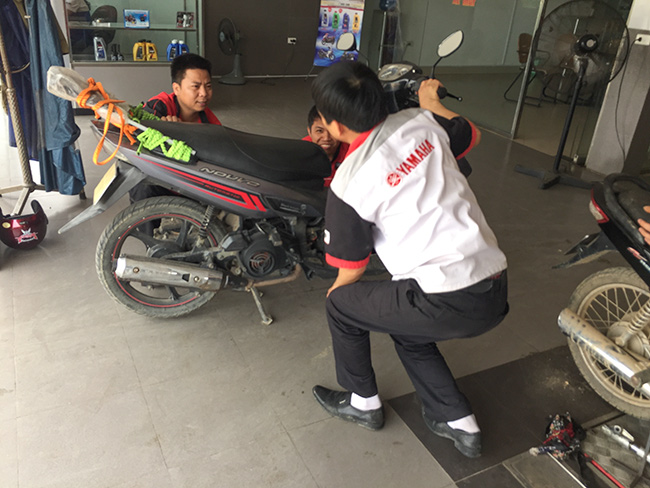 Not enough battery water and an old spark plug was the diagnose after opening the cover on one side and pulling out the battery. So they filled it up and put it on a charger. Than in with the spark plug and with the help of a spare battery it did start like new.
Another 15 minutes and a few test drives later they put the old battery back in the bike and fixed the plastic parts on the each side of the bike. 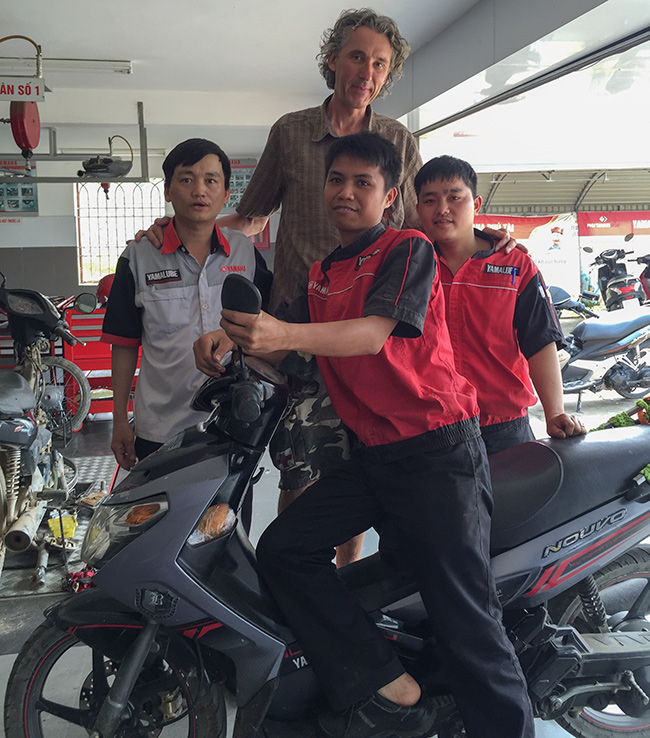 That is 100.000 Dong Sir! 4€ if you are not familiar with the exchange rate. Not to bad if you consider that 3 guys where working on the bike and I now have a new spark plug! The clock: 61573 kilometres
The sky: Gray
The road: dry!

There was nothing interesting on the way to Dân Lực so I did not take a picture or I was too lazy? 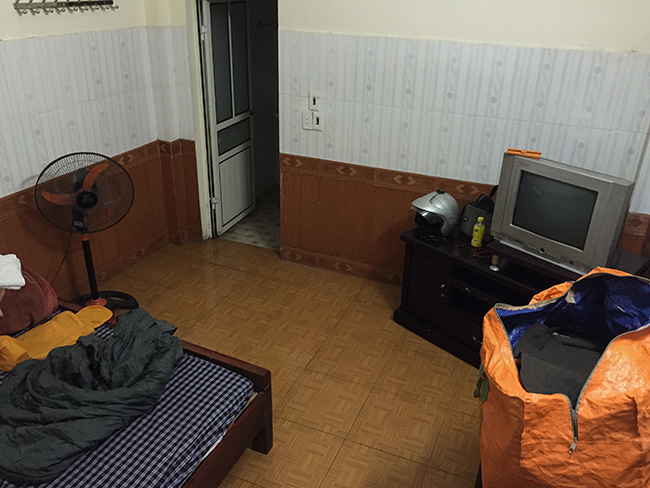 The next morning the bike did not like to start again but now I only needed 2 kicks to start. Off towards Ninh Bình. Looking forward to that blue sky and sun that the forecast predicted. Well the whole day was Gray again and in the afternoon I reached the Chez Beo Homestay.
The clock: 61893 km: 191 kilometres today. The sky: Gray the whole day! 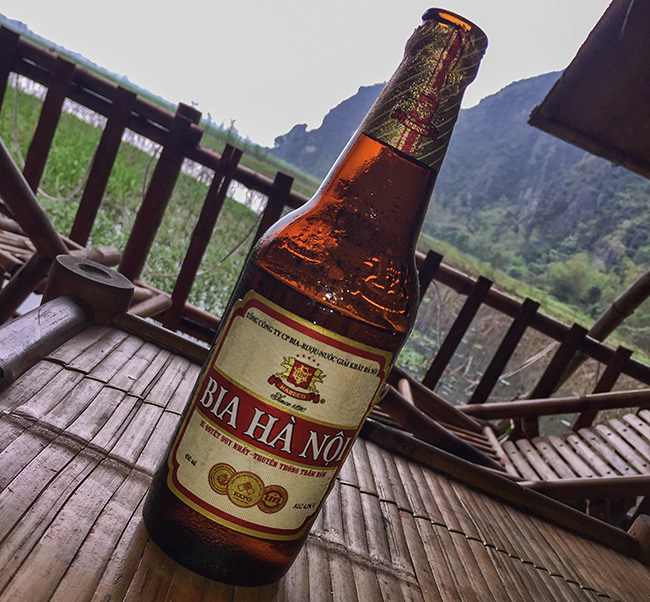 Free welcome back beer at the Chez Beo Homestay – thank you Viet! I am back after almost 4 weeks and the sky is still the same. But it is warm now. 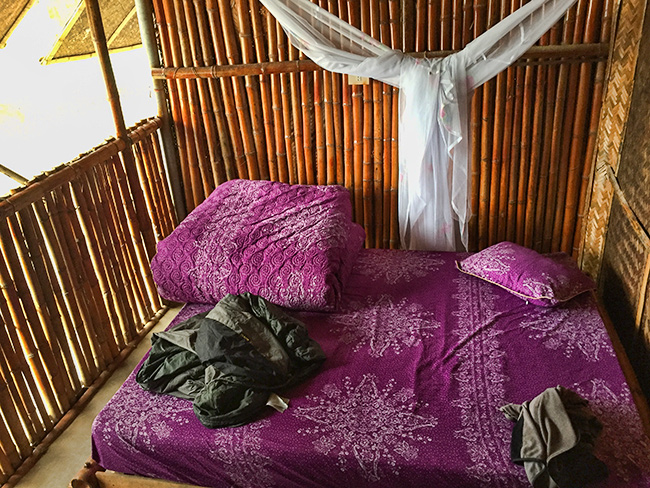 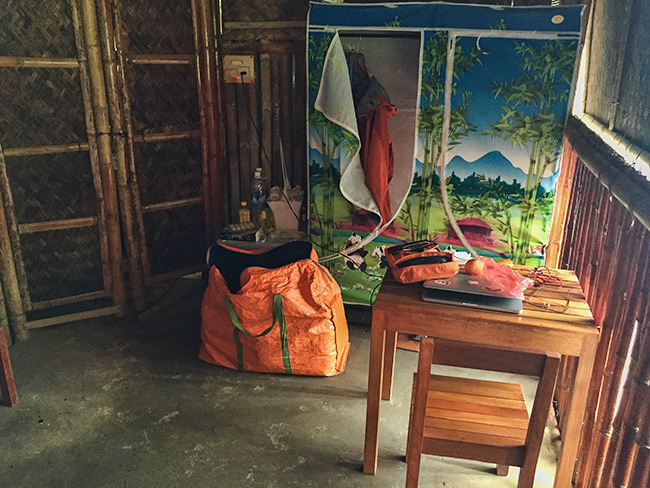 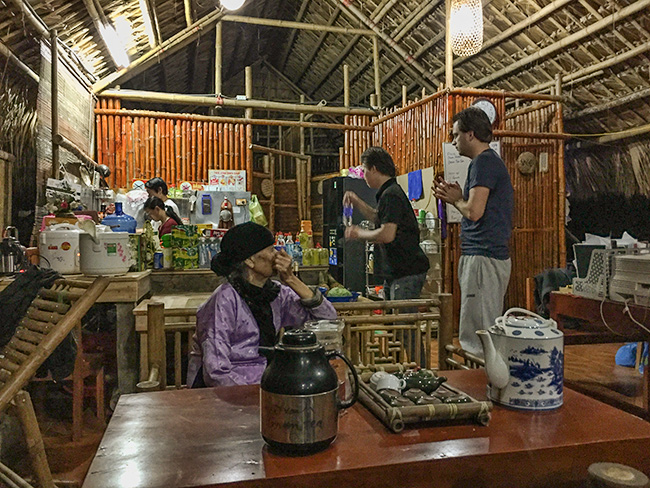 Dinner in the making – got 10.000 Dong more expensive but for 50.000 Dong it is still a steal! You can eat as much as you like and I never saw nobody leaving the table hungry.

A visit to the Bái Đính Temple

The next day a group of 4 Polish people left with Viet for a day trip. I did tag along. Our first stop was the Bái Đính Temple or Chùa Bái Đính as the Vietnamese call it. In the compound you find the original old temple and a newly created larger temple. Covering about 539 hectares it is the largest complex of Buddhist temples in Vietnam.
Over 1000 years ago Buddhism was the state religion in the Ninh Binh area. Many ancient temples date far back – and so does the old Bai Dinh Pagoda in the mountains of Chang’an. 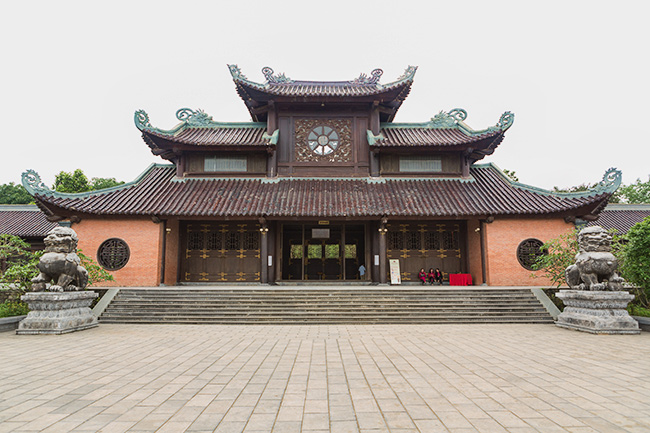 From parking you take an electric bus to the entrance. This is the entrance of the new complex. 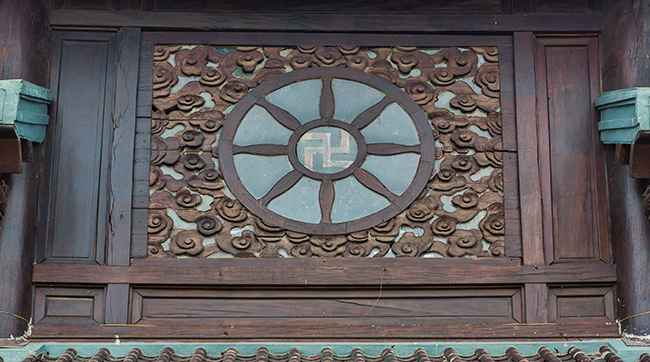 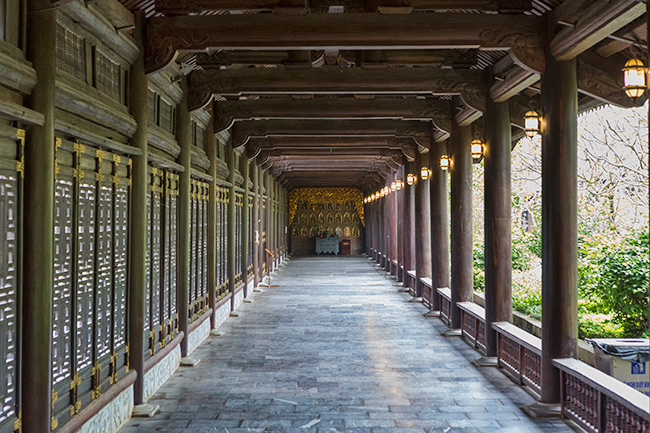 One of the walkways 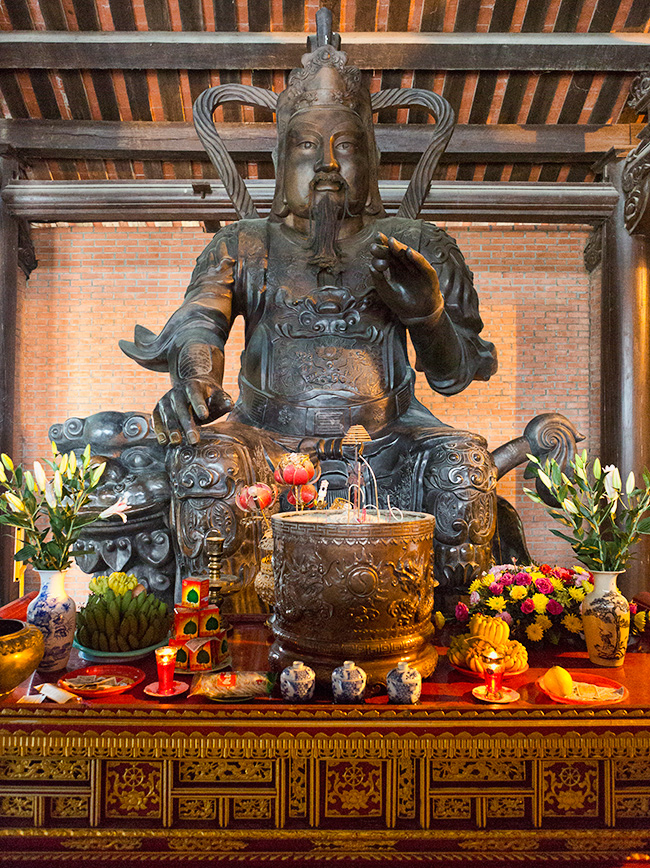 One of the many statues in the temple 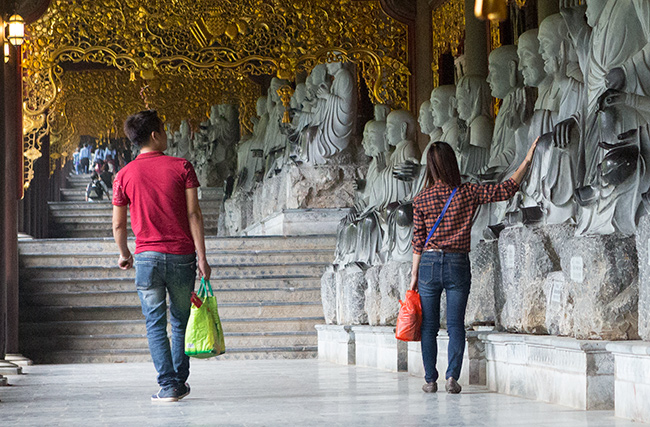 There are 500 Arhat statues in the Temple grounds. They all have a height of 230 cm and were carved from Ninh Bin stone. 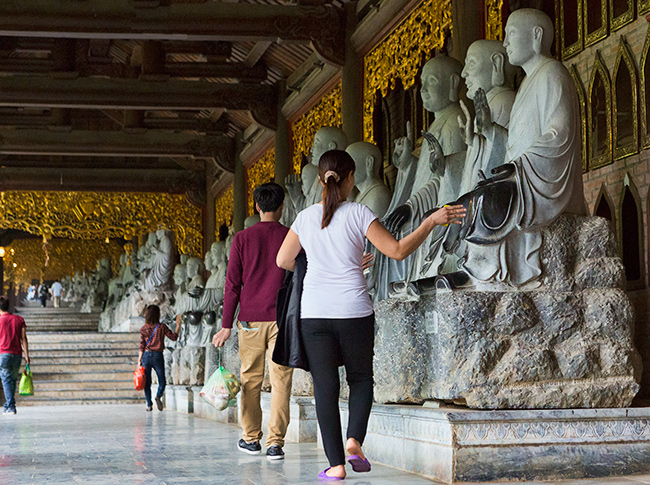 If you touch them it will bring health or good luck. The belly for example wealth, good luck, and prosperity. They did not bring picnic in the plastic bags – they carry alms to offer 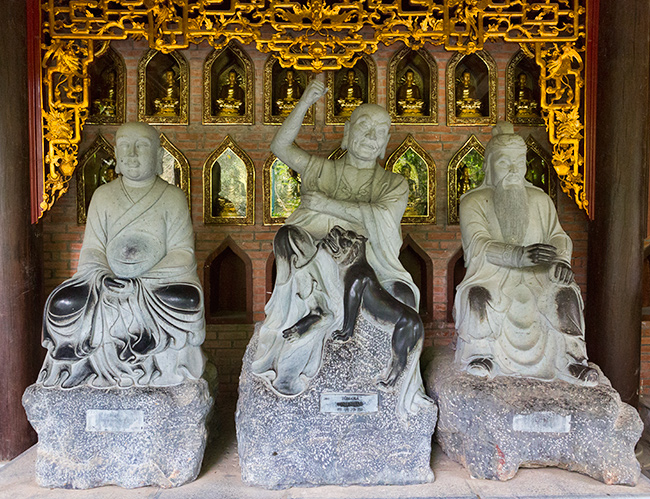 No clue why the animal needs to be touched too?? 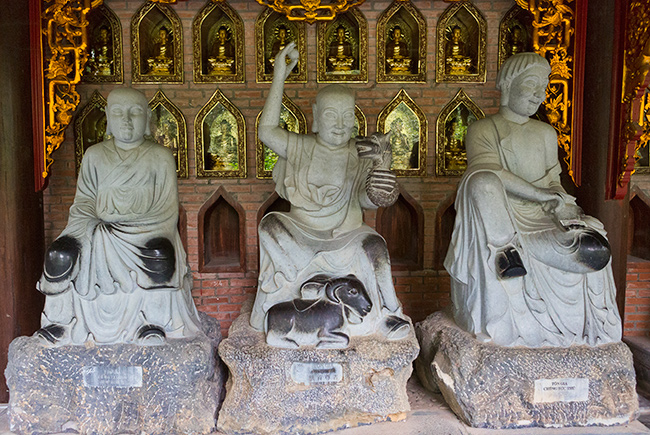 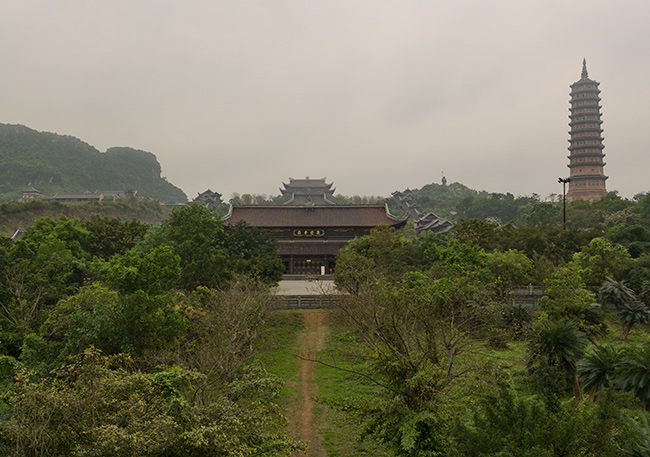 Hmmm blue sky would be nice to have a few good outside pictures of the Bái Đính Temple! 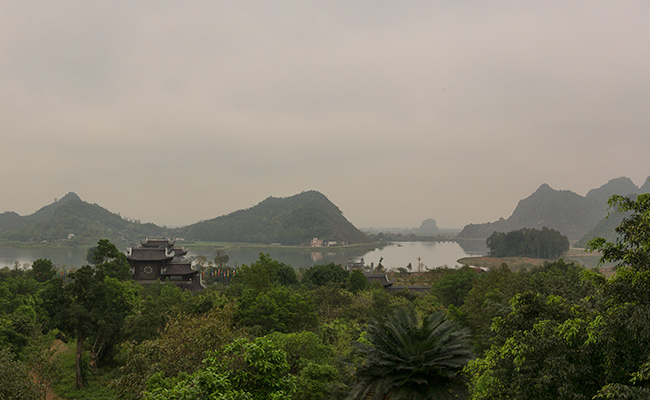 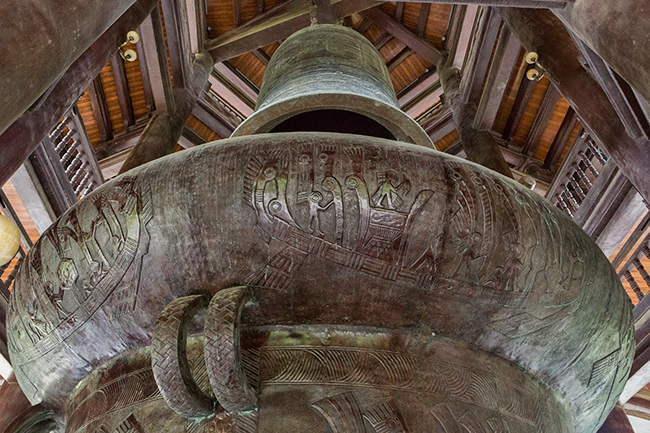 That is a really big bell – The 36-ton bronze bell in the Bell Tower. Underneath is a big drum 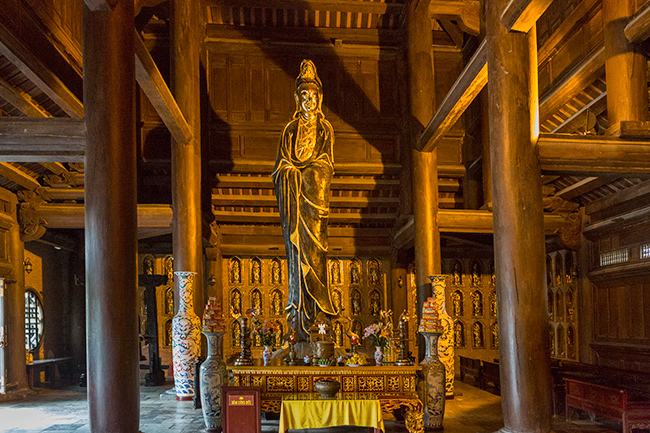 This statue is made of one really big tree 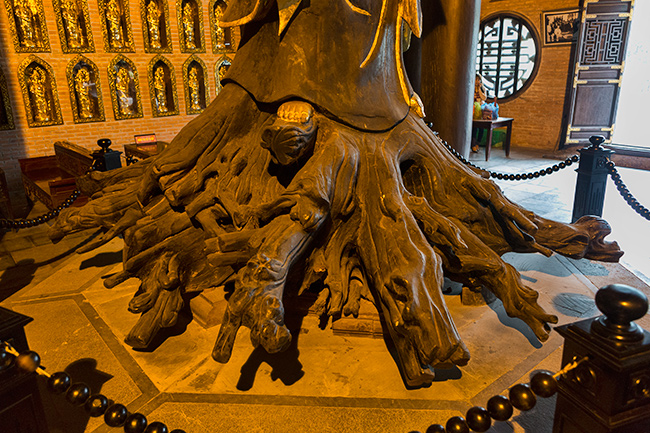 That is the lower part of the tree 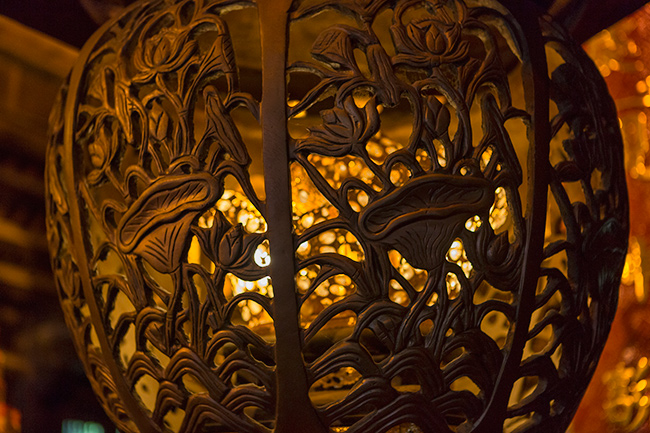 Detail of a lamp 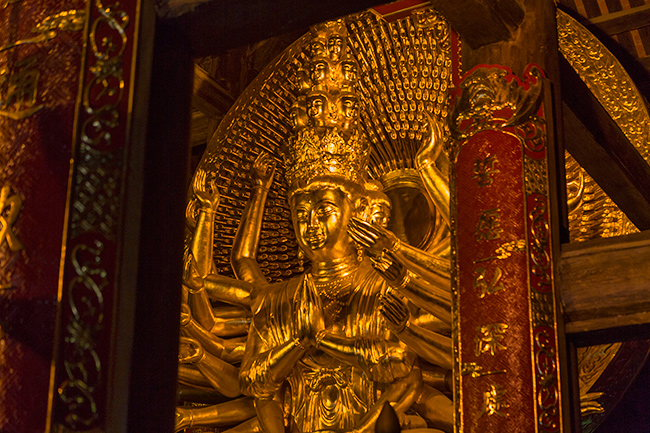 The thousand-armed Avalokiteśvara. Quite an interesting story: Avalokiteśvara vowed not to rest until he had freed all sentient beings from Saṃsāra (The repeating cycle of birth, life and death. And the consequences and actions in the past, present and future after rebirth)
He gave all he could but he realized after a while that there are to many unhappy beings out there and he is to slow to help them all. As a result of that struggle his head did split into 11 pieces. Amitābha (The Buddha or A-di-đà Phật in Vietnamese) saw that and gave him 11 heads. This way he could hear the cries of the suffering.
He did hear all those cries and wanted to reach out but as he tried he saw his arms shattered into pieces as well. So Amitābha did help again and gave him thousand arms to help the suffering. 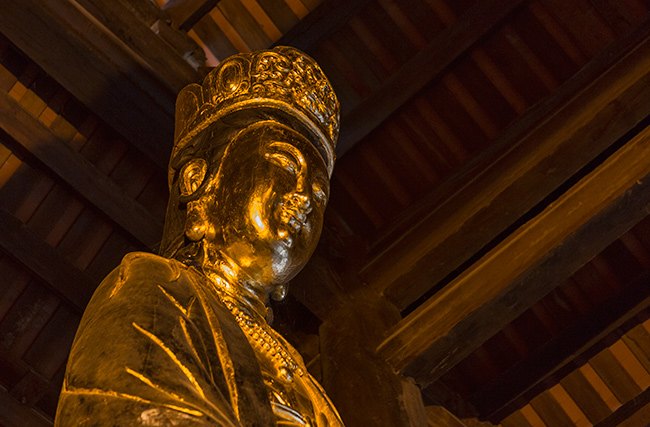 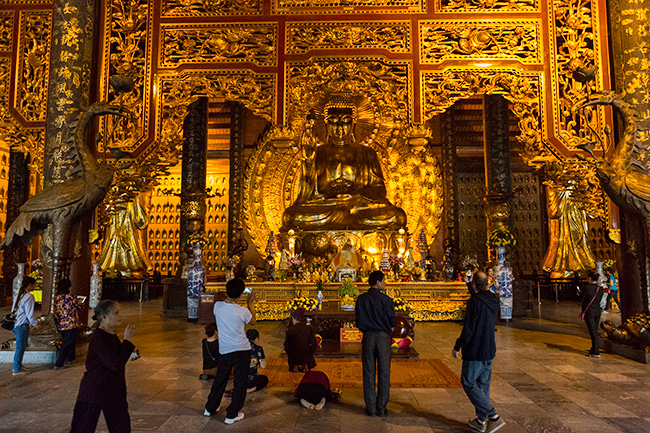 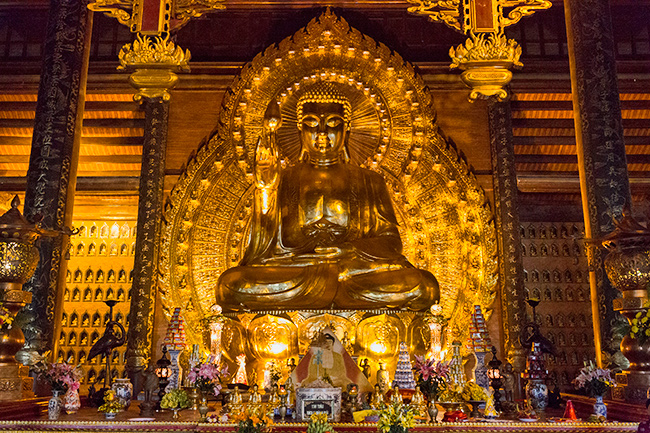 A lot of gold 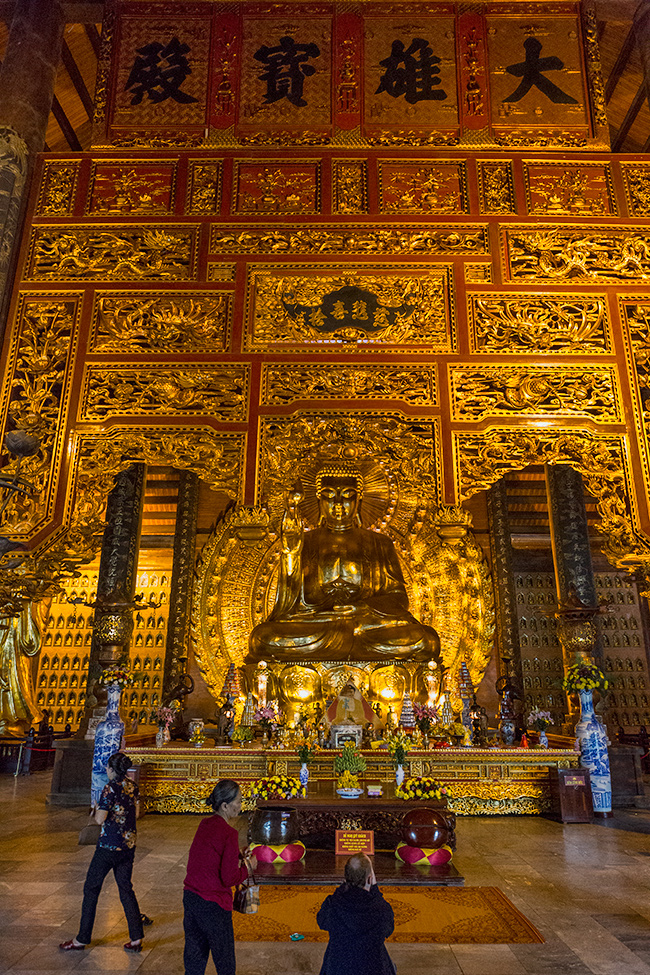 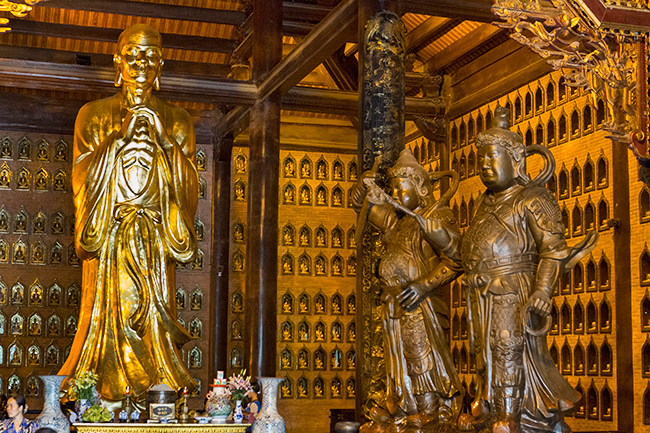 Another statue with two guardians 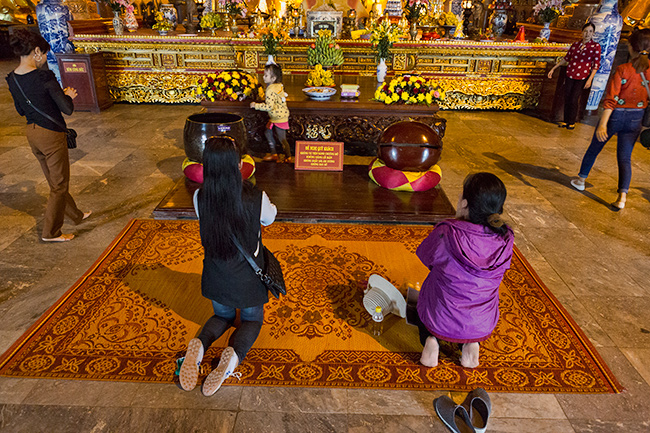 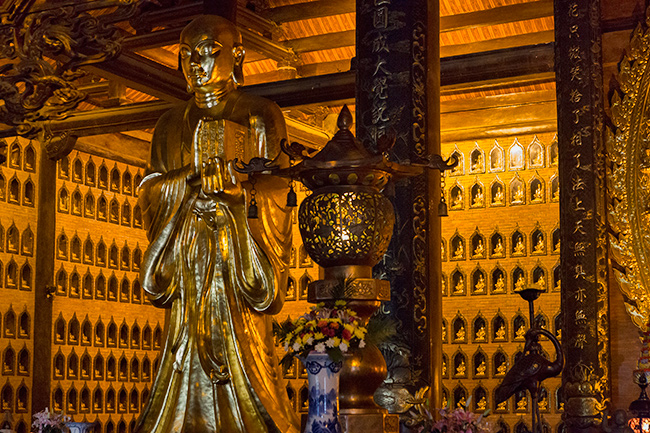 The many small buddhas you see in the back here and in the walkways are bought by people. If you have enough cash to spend you can get your own. But you must hurry – soon they are sold out – unless they build another hall 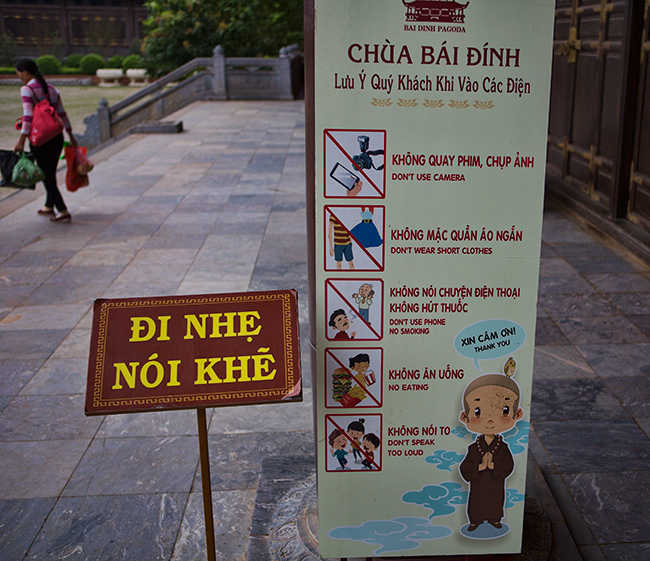 Upps – nobody told me!