The Air Asia plane from Bangkok to Hanoi was on time and at 8:20 local we touched Vietnamese tarmac at Hanoi International. There was not a lot going on so I had not to wait a long time for my visa. Arranged my visa on arrival with Vietnam Visa Pro. Great service! Less than 24 hours after filling out the online form and send the money I had the documents to print out. Than you fill out everything and give the papers, 25 US $ and 2 passport photos to the immigration officer – wait 15 minutes and off you are to immigration and to your bag. 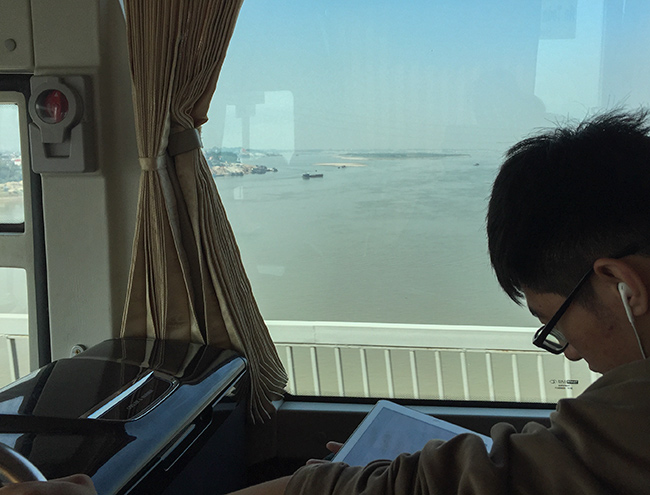 Exit the airport and turn right. Walk for 30 seconds and you see the big bus. It is only 2 US $ and it will bring you downtown to the Vietnam Air office. There are also public busses for about 0,30 $ but they take about 1.50 hours or longer and can become quite crowded. 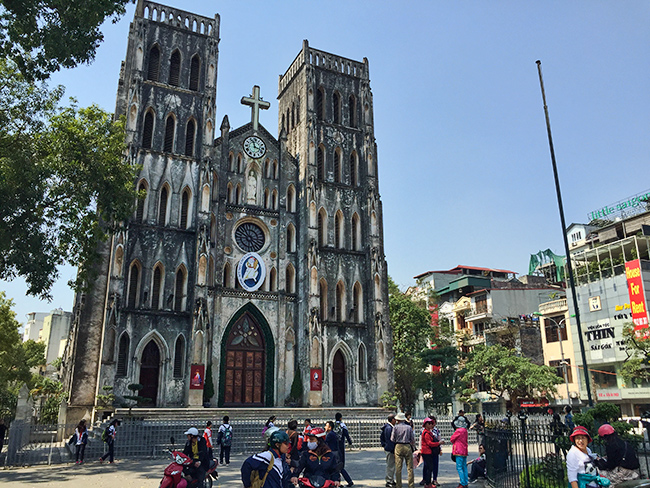 On the way to the hotel I did pass St. Josep Cathedral. It was one of the first buildings the French finished in Hanoi. The church opened in 1886 – that makes it the oldest in Hanoi.

Did stay at the North Hotel No 2 at 5B Ngo Tam Thuong Street. Great little hotel with a super friendly manager. The room was small but clean with a super comfy bed and a hot shower with good water pressure. The fridge and TV I did not need but in the summer you can have cold drinks. The street outside is to small for cars so it is really quite compared the rest of the old quarter. They have a web site and you can find them on booking.com. I really do recommend the place. Some other people pay more for a dorm bed – keep that in mind! 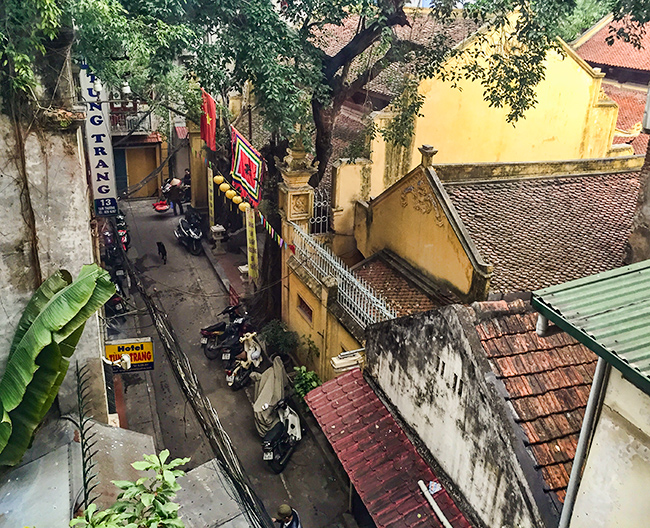 The street from my window with the temple 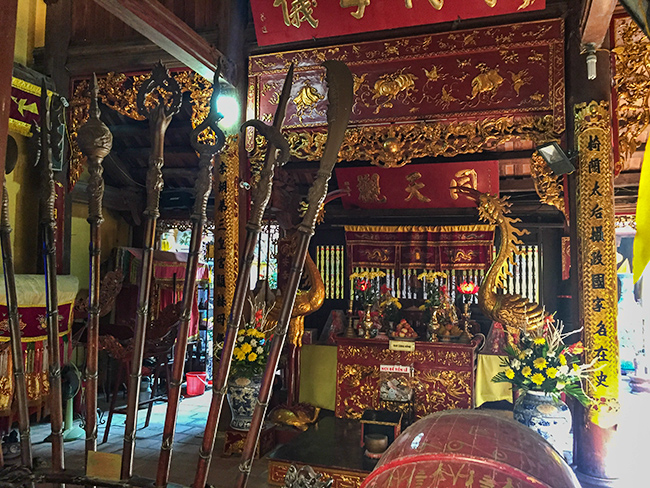 Temple next to my hotel 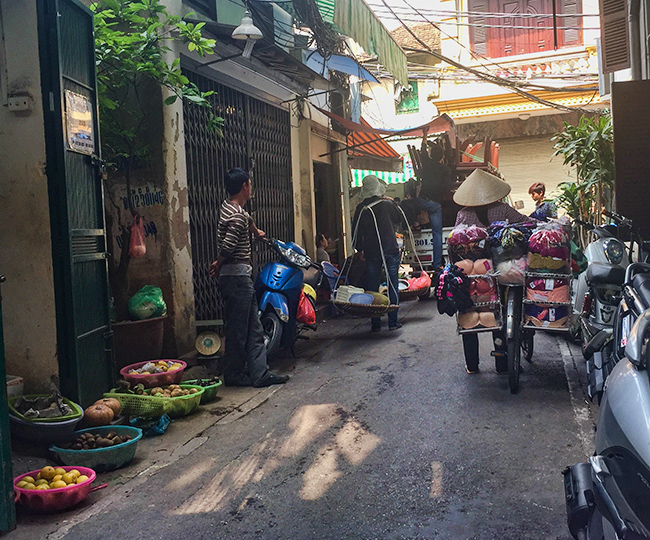 To the right of the hotel door 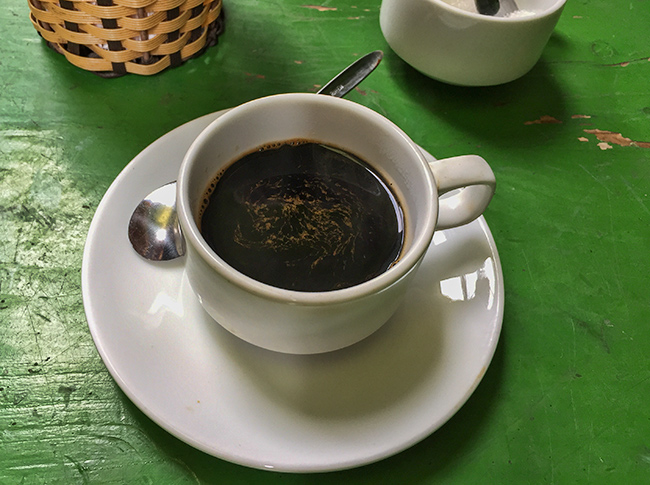 Only 10 steps from the Hotel is a little coffee and fruit juice place. Vietnamese coffee – not a bad way to start a day 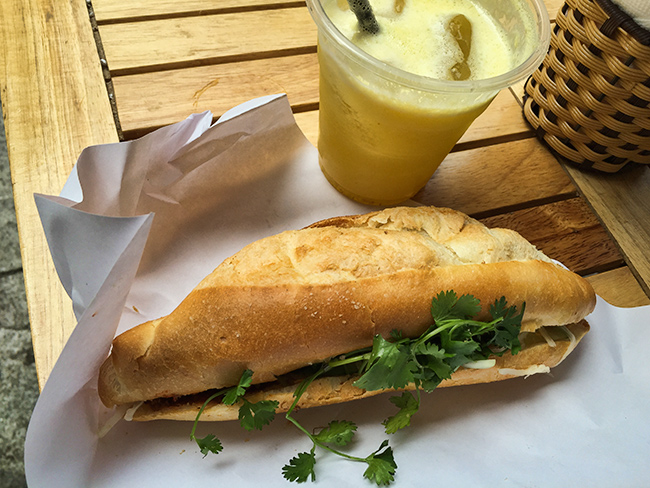 First stop Ha Trung to change money. Only 10 minutes walk from the hotel is that short street with gold shops, bag makers and motorbike seat refurbish shops. Did ask in 5 gold shops and changed my € into Dong. In seconds you become a millionaire – great feeling but not to easy to get used to. It was 24250 Dong for 1 €. The biggest note is 500.000 the smallest you usually get is 1000. Somewhere I have some 10 and 50 from my first trip to Vietnam in 1989. But nobody uses them anymore. No clue why they do not kill the last three digits – would make everything so much easy for all the tourists. 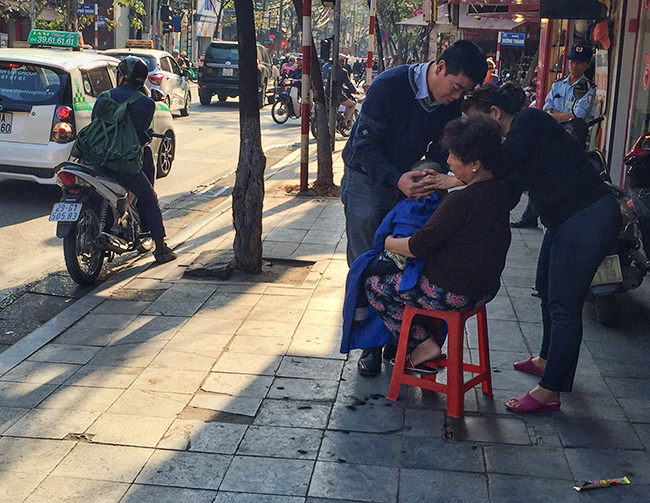 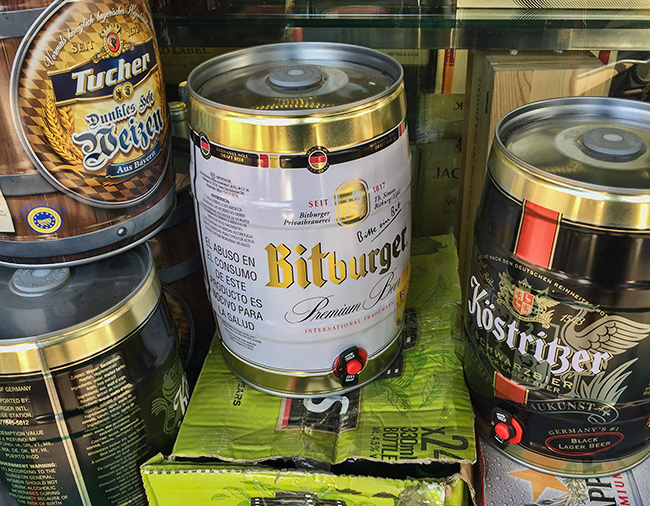 Just before Ha Trung – German Beer! What a nice shop! 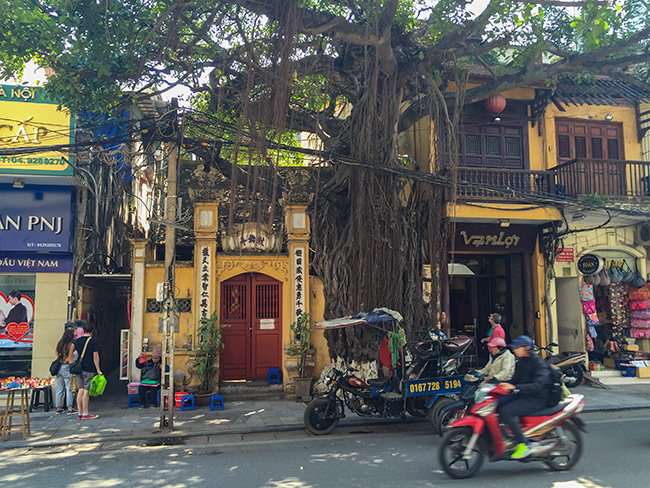 The streets of Hanoi

The hunt for the Motorbike

After I had cash it was time to look for a motorbike. Did some research before and found a few bikes under 180 US from other travellers that where on the way out of Vietnam. You can tell when they just get into town then they think they can get 350 for the bike because that is what they have paid a few 1000 km before. So all of them asked to much. A few others did not replay to my mails.
Did meet one guy at the shop that had to sell the last day and he got only 120 from the shop. Should have sold it a day before to another guy for 180 but though he can get more.
I did not want to waste too much time since I only have 7 weeks here. Two days – that is it!
Walked to one place that quoted me 30€ for a month to rent. Was not easy to find it in the maze but finally I reached the shop. Only to get a 6 $ a day quote? WTF? 6 weeks times 6 $? And I can own one for 180$. What a wast of time. 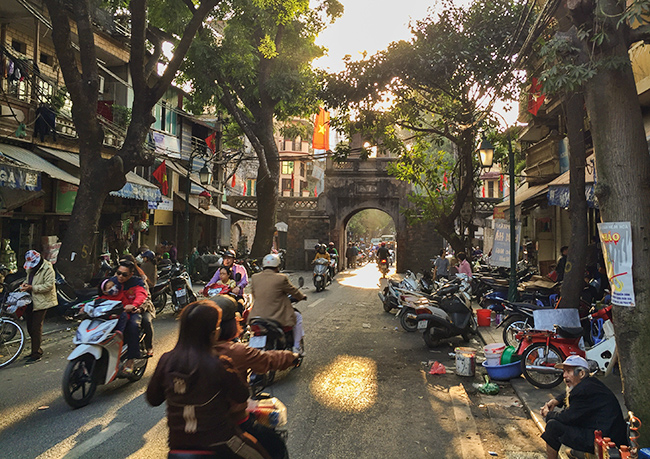 Back to the Old Quarter 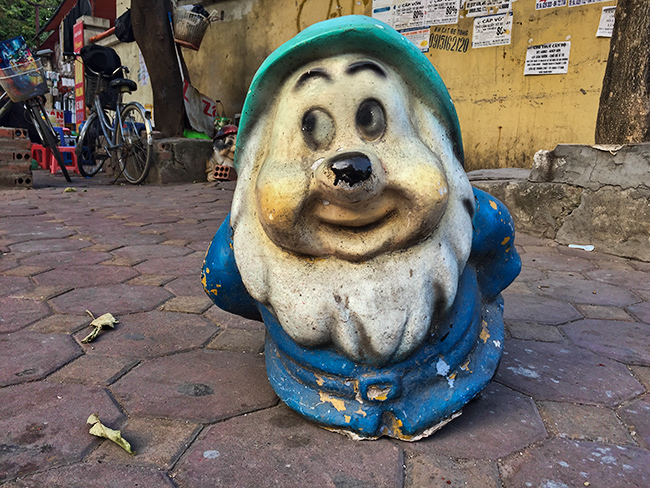 Dwarf in the streets of Hanoi 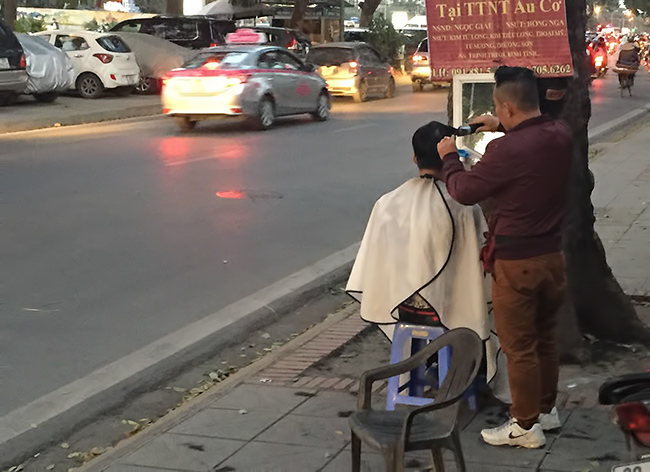 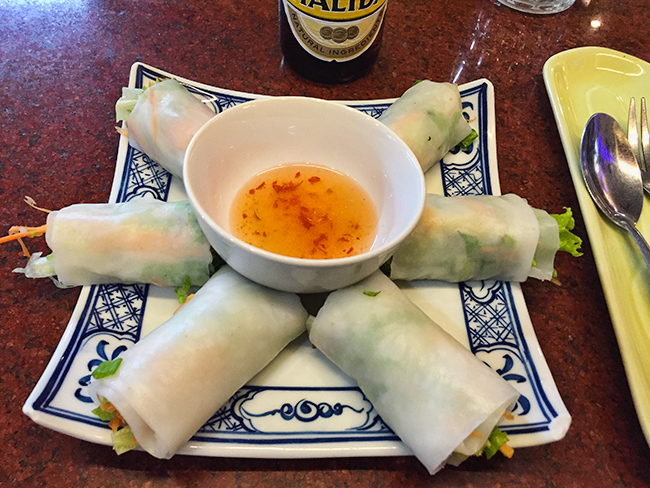 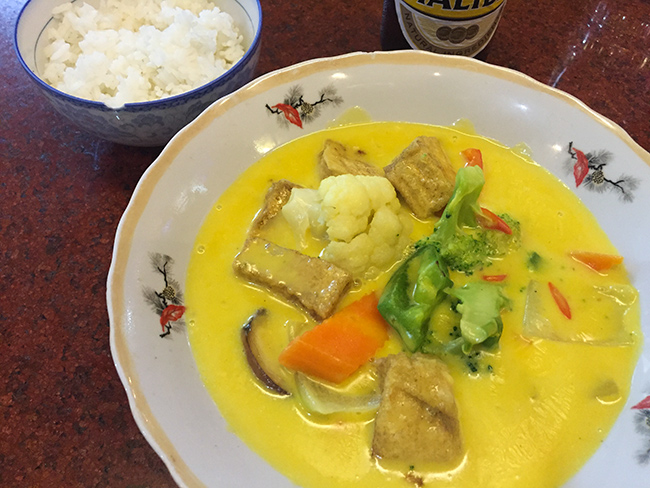 Back to the hotel it was – tired from getting up early to get to the airport and all that walking in Hanoi. 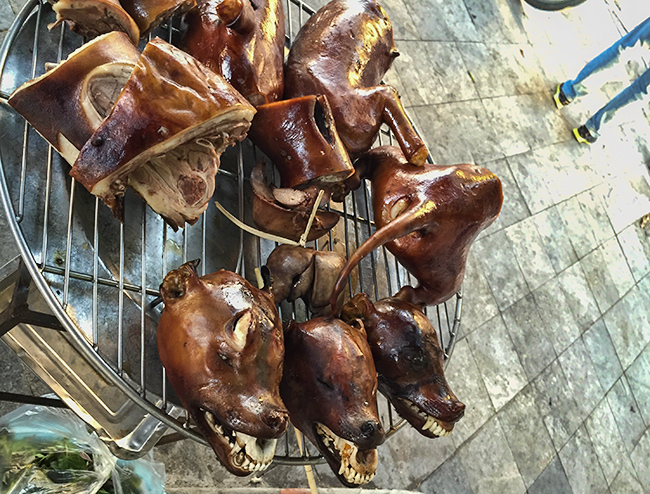 Dog meat anyone? You can see from the face that they did not have a nice death. Guess that is why they put the head there – so you can see the pain. 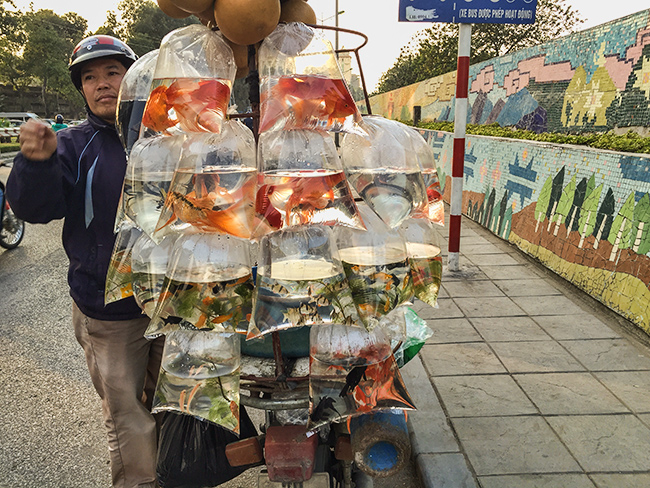 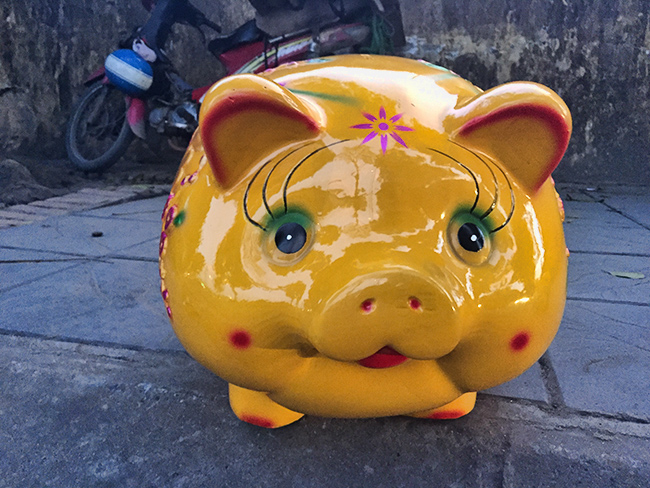 This pig is for sale! 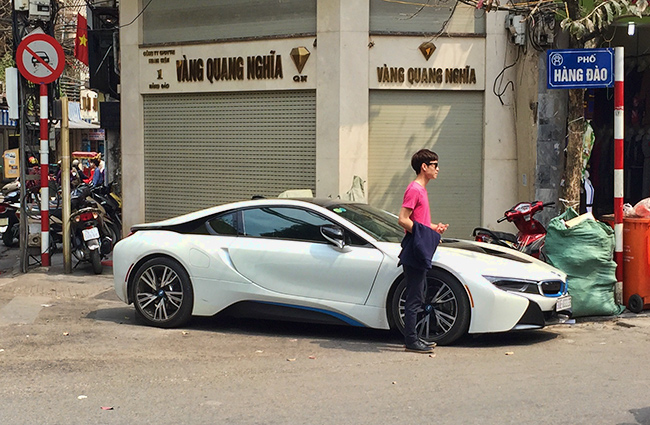 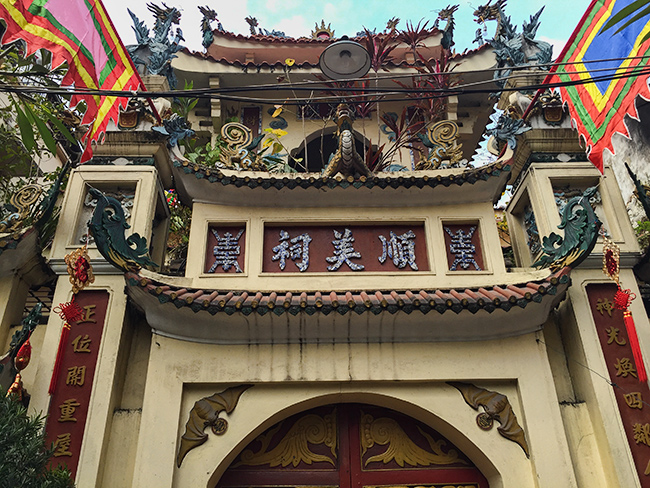 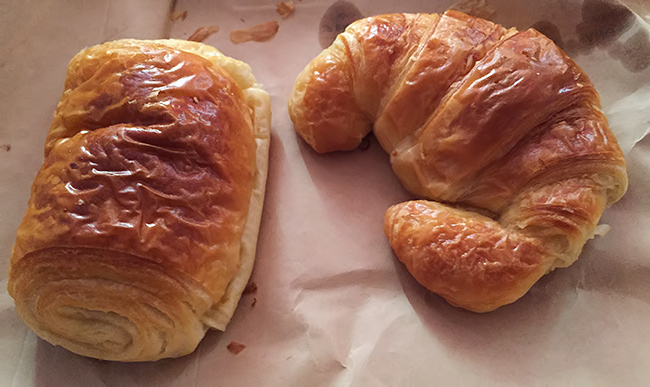 After breakfast I walked to the bike place. Did drive a semi automatic wave but both brakes where really bad. The other shop had 4 different Yamaha Nouvo 125 that he could rent me and one of them was OK. 61€ for 6 weeks – a good deal. He will give a helmet, lock and a construction for the bag as well as elastic cord to fasten it. Great – did fill out the rental form and paid 1.500.000 Dong and 200€ deposit. He told me I can get the bike tomorrow at 10.00. All set – time to go back to the Old Quarter and meet Toma for dinner. 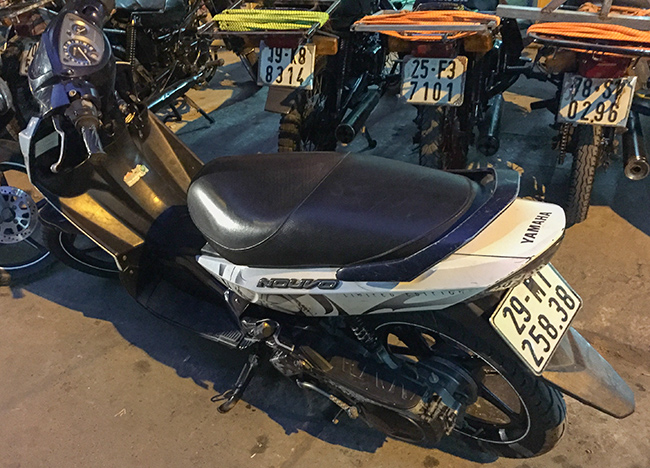 This is the bike I rented for 6 weeks. The bike that would not be the one for my trip. 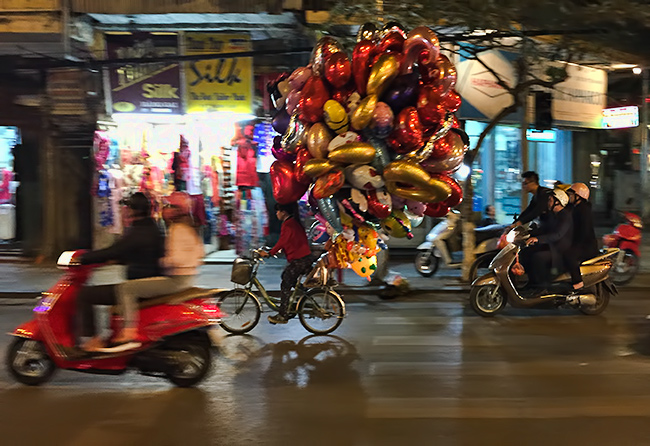 Balloon Girl on the way to the lake 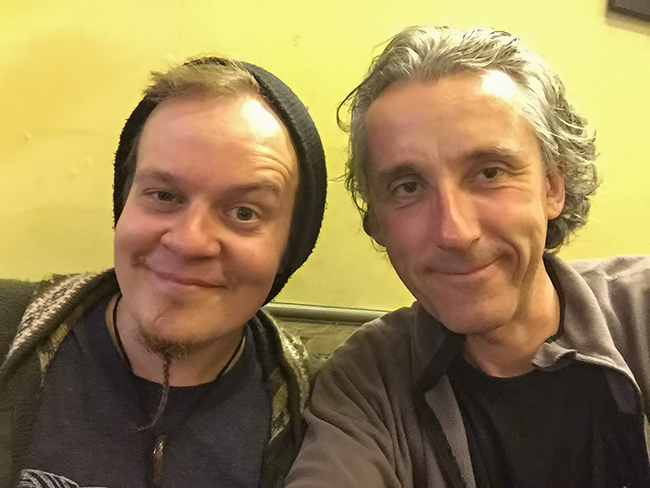 Toma does like his Indian Food and since it was his last evening in Hanoi he wanted to go for it again. Like the last 4 night as well. 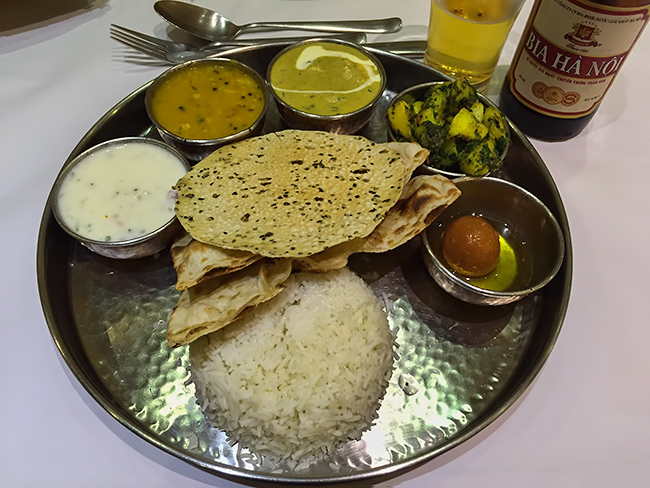 The food was really good – I had North Indian and remembered the taste well. But it was way to expensive! Almost 10€ with one beer – not my usual budget for food.
Then we had a beer next to Toma’s hostel. He showed me his drawings and we talked for a while. He had to get up early to get to the airport the next morning. He will join “The Band” on Sri Lanka for some sun and fun. I went home as well back to get back into my soft bed for some zzzzzzzzzz’s.

Do you want to stay up to date and not miss a post? Subscribe to the blog on the top right or all the way down on this page!