The next day it was off to Soppong or Sappong. The Canadians and the Greeks with their rented bikes and me with Mikes Honda Sonic. We took the road leading to Mea Hong Son and after a few kilometers there is almost no more traffic. Soppong is about half way between Pai and Mae Hong Song and is a trading center for the locals that come here from their small villages in the mountains. The population is about 40% hill tribe (most of them are Lisu, Karen and Lahu), 40% Burmese Shan, and 20% Thai and a few Haw Chinese Muslim families. That makes for a quite interesting morning at the local market. 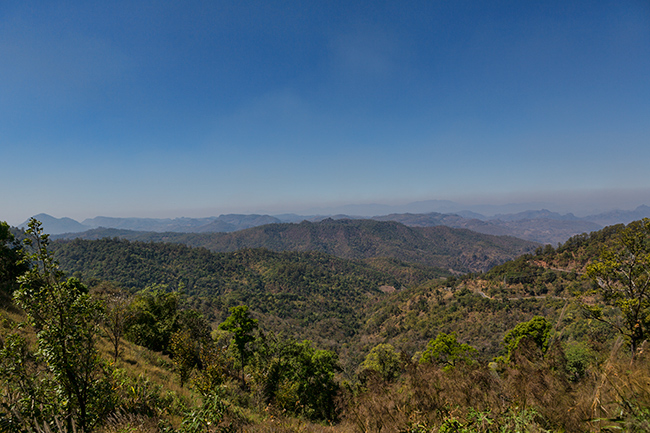 View from the Mountain toward Mea Hong Son 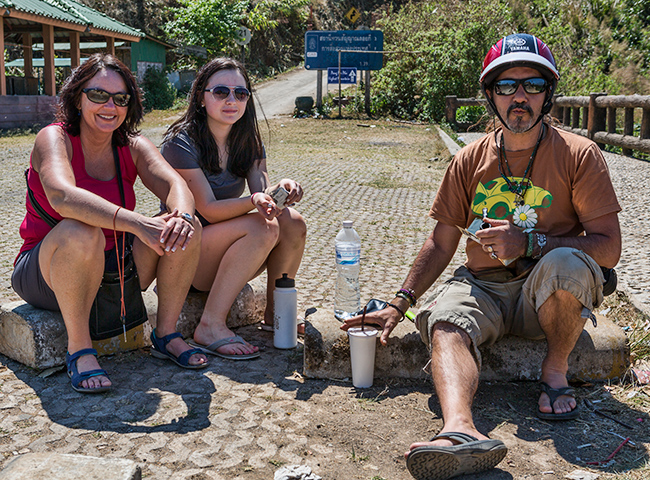 The Sonic started to have breathing problems again so i had to remove the air filter. My friends did wait for me at the viewing point. Without the air filter the Honda was happy again and i could enjoy the road. 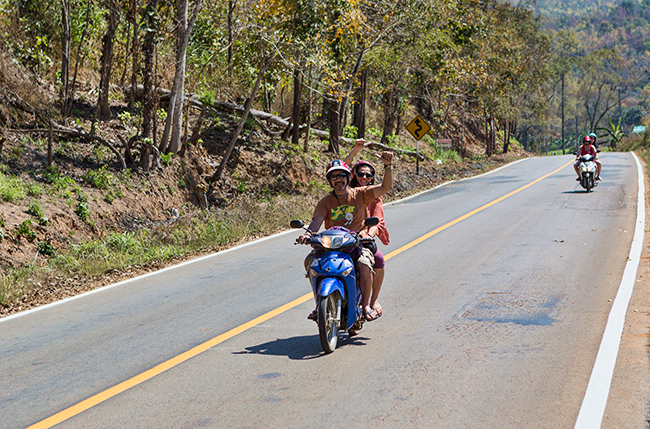 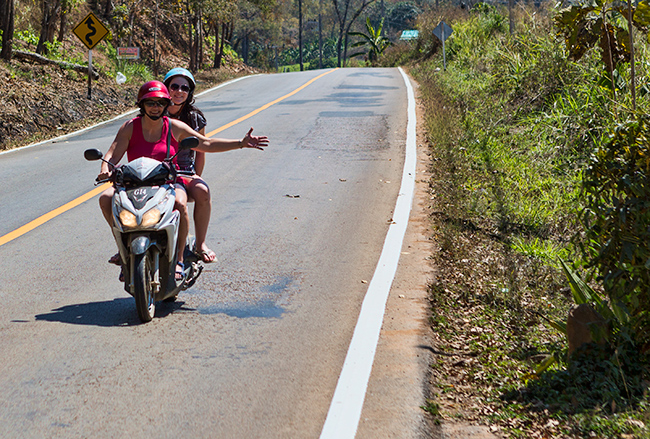 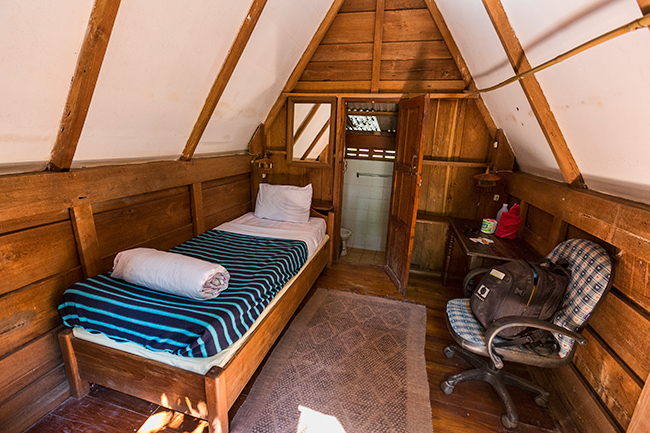 We had some food and did check in at the Eden Guest House. This was my bungalow. 250 Bath with private toilet and shower. Quite a good price up here. 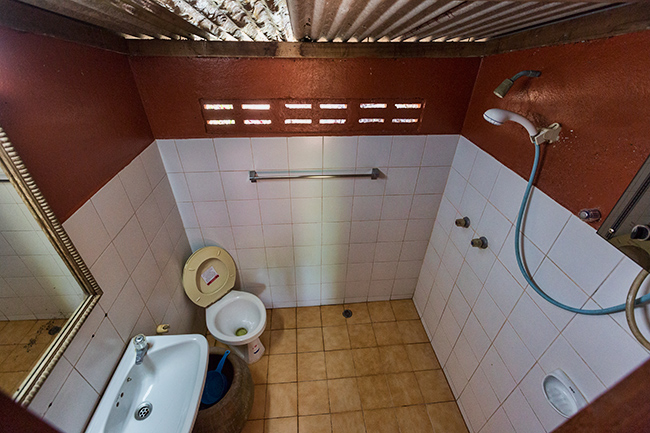 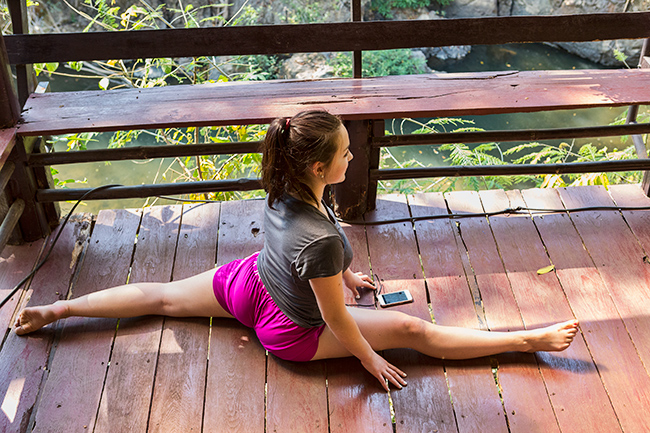 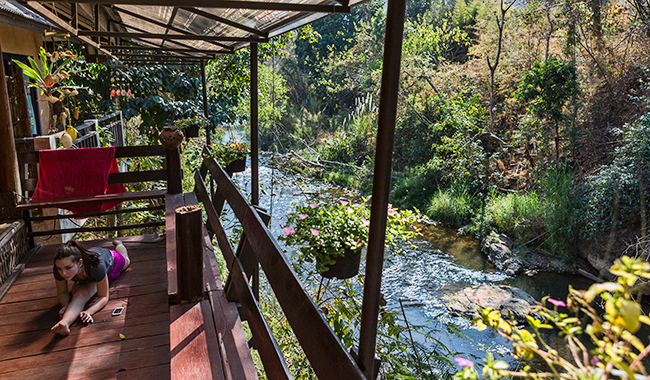 The view from the river terrace

Time to explore Tham Lot Cave. The Nam Lang River flows through the cave and they take you in the cave with rafts. Than you walk up and down and over the river in the cave. The cave is filled with stalactites and stalagmites and you get quite confused with all the stairs and up and downs. In the end another bamboo raft waits for you to get you out again. Than you will go up to another part of the cave where they found some teak wood coffins. This part is called 5 coffin cave. They have been carved by the Lawa tribespeople thousands of years ago.
A few years ago the stream must have been deeper but when the big flood hit Pai a lot did change here as well. Lots of trees went in and i guess they did destroy a bit of the lower parts. Also a lot of sand and small stones I guess. After the flood they had to build a dam to keep the water level up so they can operate the rafts. The cave is also home to large numbers of fish which you can feed loads of bats and more than 50.000 swifts that fly into the cave with the setting sun. 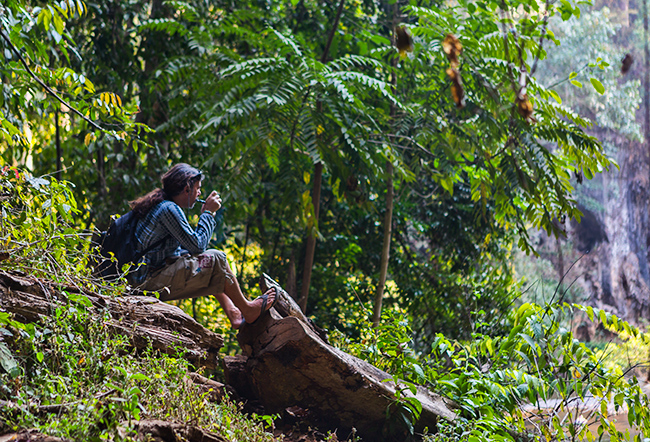 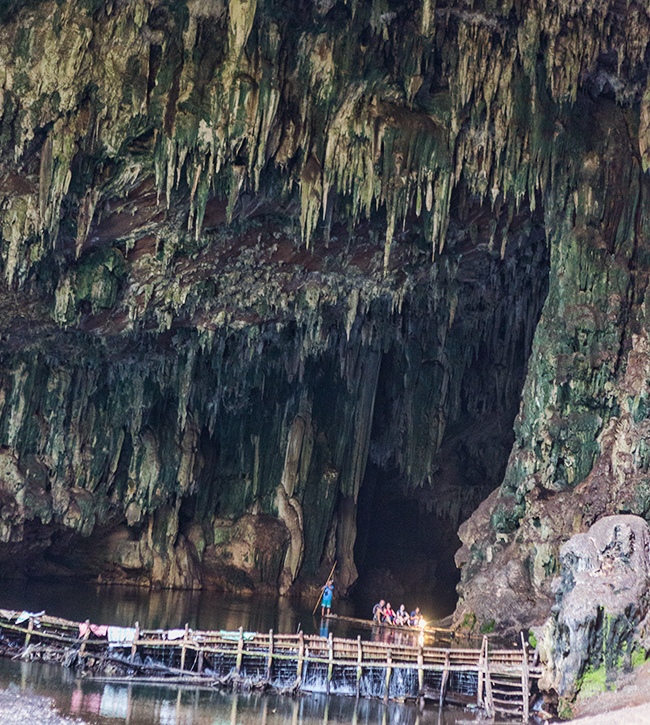 The downstream entrance to the cave 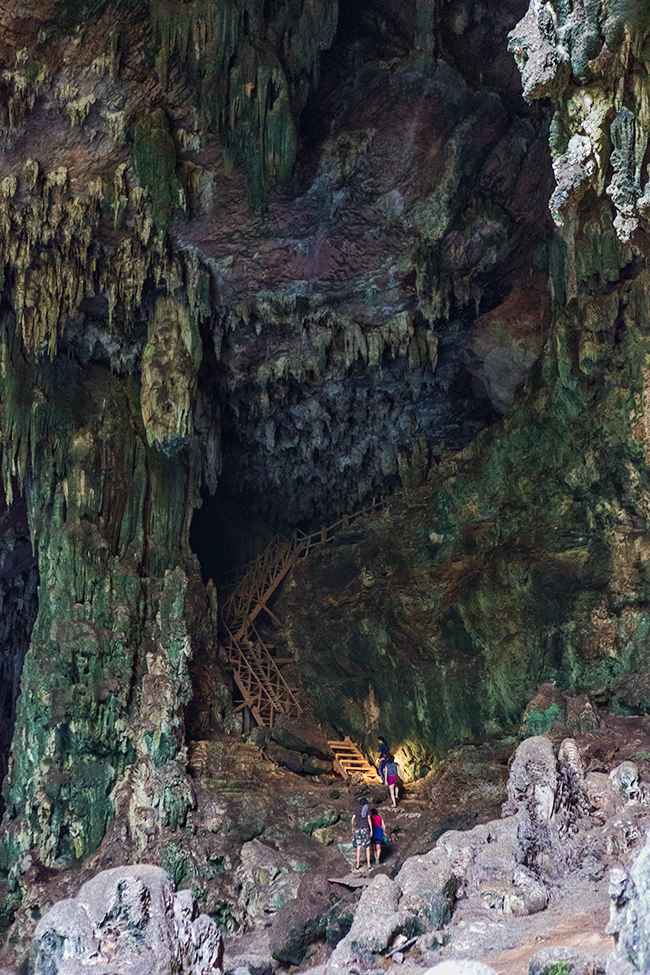 To the coffins we go 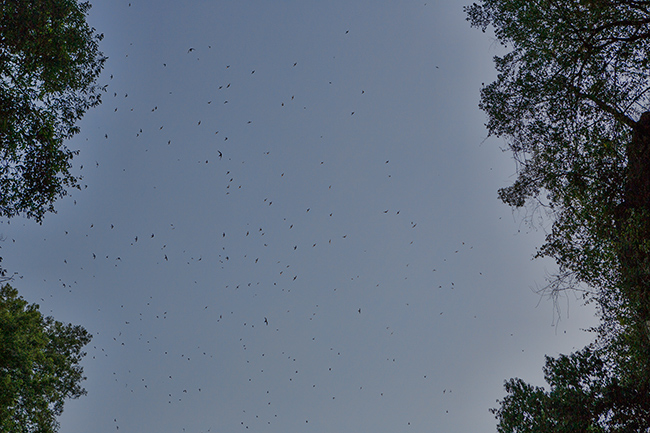 The birds fly into the cave – really not a lot of light to take pictures of them. I was here a few times and it is amazing to try to follow them with the eyes. It looks like if they would fly right into the rocks and then they are gone. And they do fly fast!

This was 7 years ago but it is still the same every evening. 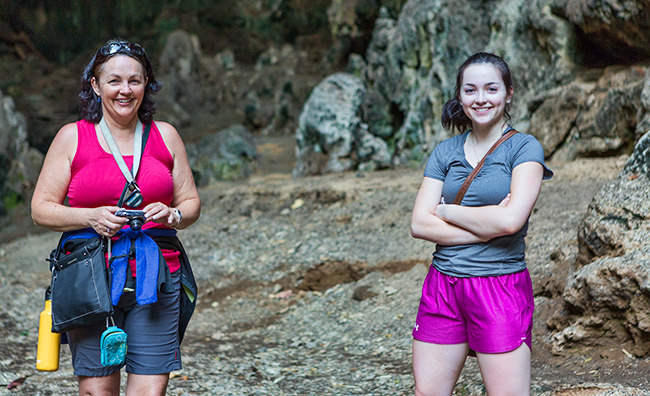 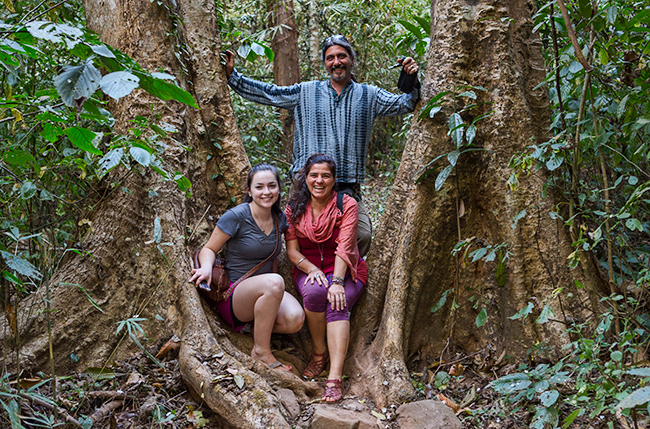 2 happy Greeks and one happy Canadian 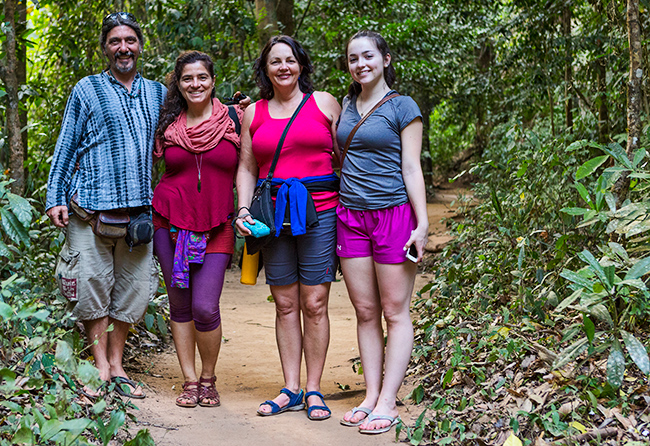 Got to have some tourist pictures in the blog! 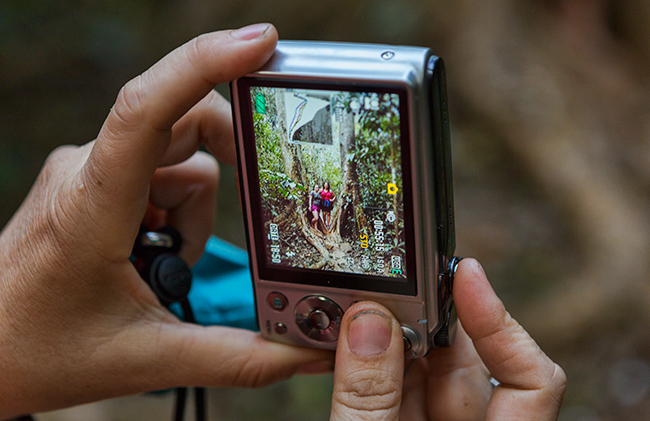 But that is more my style… 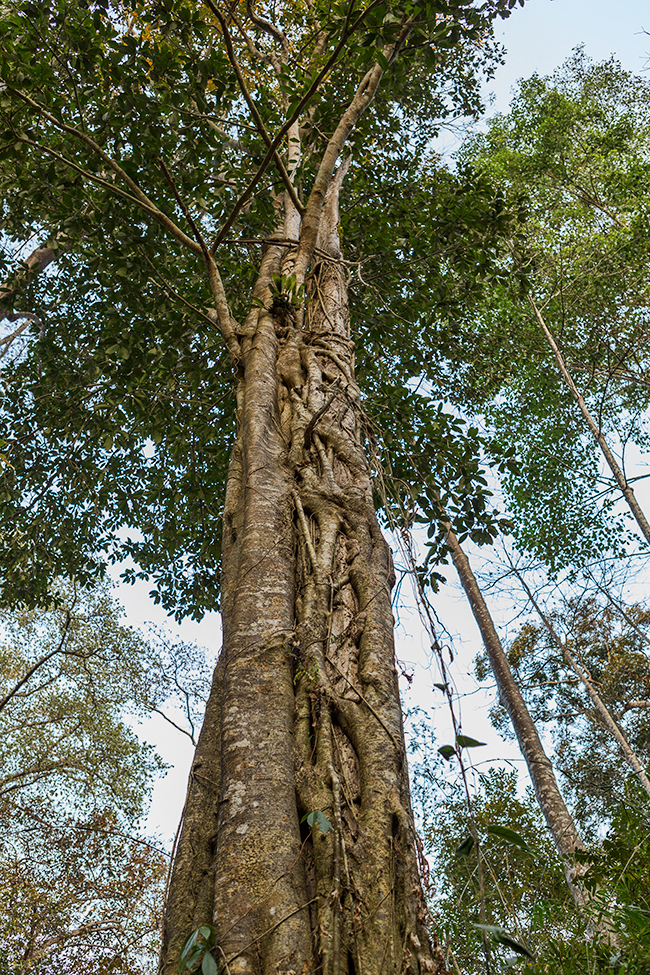 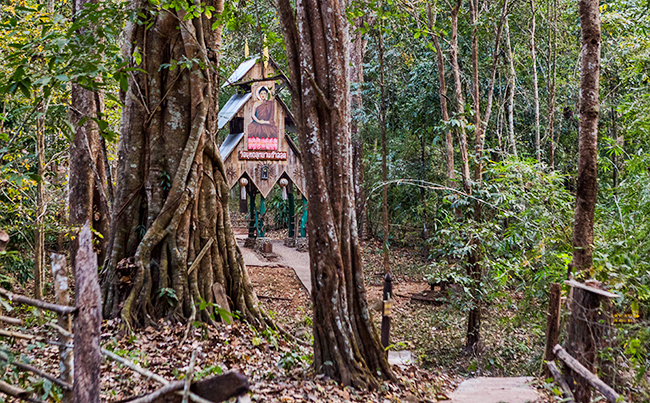 Since it got dark quick it was time to drive back to the guest house. We had dinner and a few beers. Later Mitsos and me wanted to go for some more beer. But small Thai villages “close” early so we could only find a 7/11. The management is clever here. There where a few girls behind the counter and loads of boys shopping to have some small talk. We got beer and a snack and went back to my bungalow for some man talk.