Nieuwendammerdijk is a dyke or dam in the Northern IJdijk between Buiksloot and Schellingwoude. On my way from the camp ground to Amsterdam down town I crossed it to get to the ferry. Nieuwendam founded in 1514 after one of the dykes broke. At the time the dyke lay between the IJ river and fields. Most of the people here where fisherman, traders, shipbuilder and ferryman. It was an important loading port for the goods from the farms way back in the hinterland.
The sluice of Nieuwendammerdijk is one of the most important parts of the village. Since all the good on boats from the farmland behind had to come here to get further onto other ships. The small boats docked in the harbour and the goods where loaded on bigger boats or distributed to Amsterdam.
The grain and peat trade started about 1450 when the first ships sailed from here.
On old paintings you can see many mills as well. Saw-, Wood- and Corn-mills.

From 1568 after the “Eighty Years War” more and more people did find work in the fast growing city of Amsterdam. Many ships where waiting in the harbour of the dyke village for good winds or load. This way they could avoid the higher port charges in Amsterdam. That did open another source of income. Shipbuilding and repairs.
Most of the old houses are made out of wood not stone. This way they are light and do not damage the dyke.

A lot of captains did build their homes there for their retirement. At the time they had a wonderful view over the IJ River and the boats coming and going. You still can tell the wealth from the beautiful facades of these houses.
At the big flood of 1916 a large part of Nieuwendam was under water. More and more the city did depend on Amsterdam. In 1921 it became a part of it. In the following years new development swallowed most of the village.

Detail of a house on the Nieuwendammerdijk

This one with white paint

The sluice looking towards the hinterland away from Amsterdam 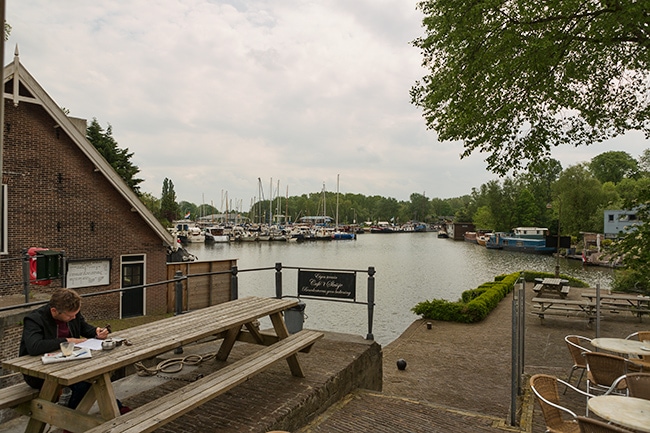 Seating area of the village pub “Café ‘t Sluisje” next to the sluice. The pub house was built in 1565. There is a yacht harbour now in front of it with some new houses as well.

One of the two pubs in the street

They do love their trees!

Art in front of a house

Looking down the street. You can see that some house have a stone wall at the front but wood on the side to keep the house light.

Must have been the butchers…

Of course the village had a church as well: Augustinuskerk or St. Augustinus church. There was an older church on the same ground. Build in 1798. In 1882 construction of the new and bigger church started. It was finished in 1889.

Next Flight in my eMail Box

Some Kids doing Street Dance at Soi Rambutri in Bangkok

A few Pictures from Paris