The second part of the Summertrip 2015 pictures. Still in Vienna – still showing Grobi a bit of the city. 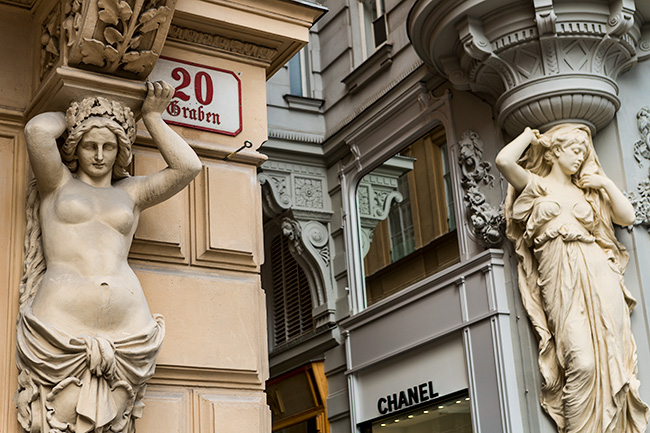 I want to move into the left house. Not sure why but somehow…. 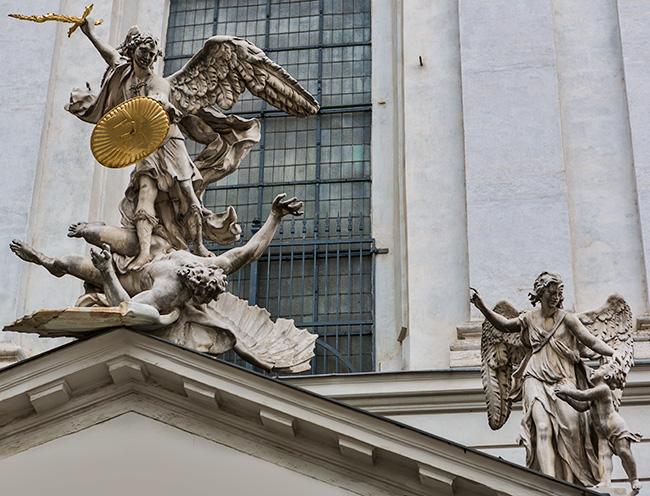 Next stop: Hofburg. There is a little church and it is there when all the trouble with them stone guys starts. Here we see an angel killing another angel. The fallen one? And another angel explains all that violence to a child that does not really give a shit. Or what do you make out of it?? Turns out that Antonio Beduzzi did that piece of art and it is St. Michael slaying Lucifer – his feathers did turn into something different. Guess Hell fire would burn the feathers? There is some more stuff of Beduzzi – I point it out for you later in this post. 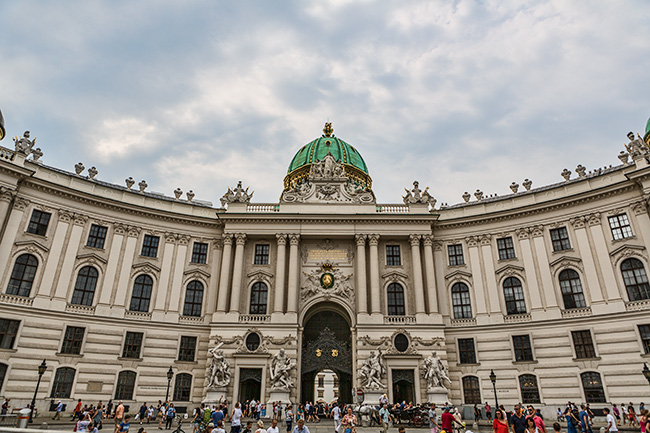 Lets bring the heads to the right now and you see: The Hofburg! Well of course not all of it but the Michaelertrakt – the North entrance if you want. Quite impressive! Wikipedia writes: “From 1438 to 1583 and from 1612 to 1806, it was the seat of the kings and emperors of the Holy Roman Empire of the German Nation, thereafter the seat of the Emperor of Austria until 1918. Today it is the official seat of the Austrian Federal President.” So now you know too! 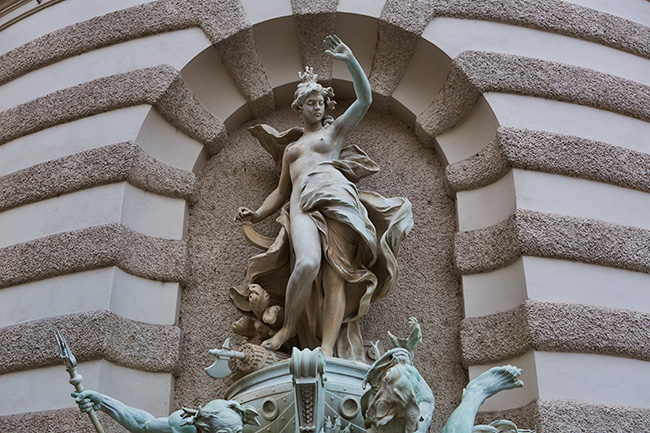 But before we go in let us look at the fountain on the left. The (Austrian) power on the sea from Rudolf Weyr. He did finish it in 1895. You see some Giants, a Sea Monster and on top of it all Austria standing at the front of a boat. ) 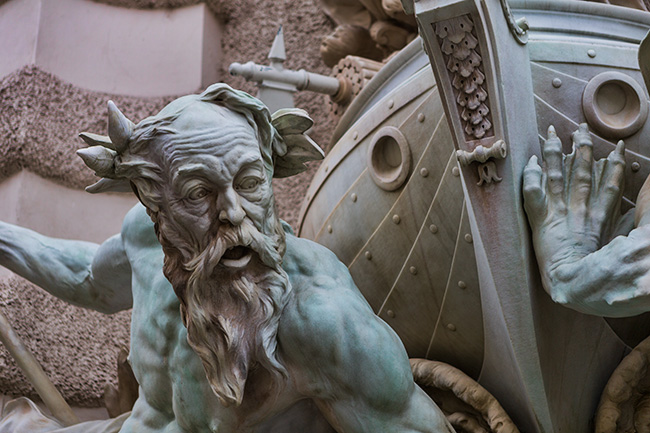 One of the Giants 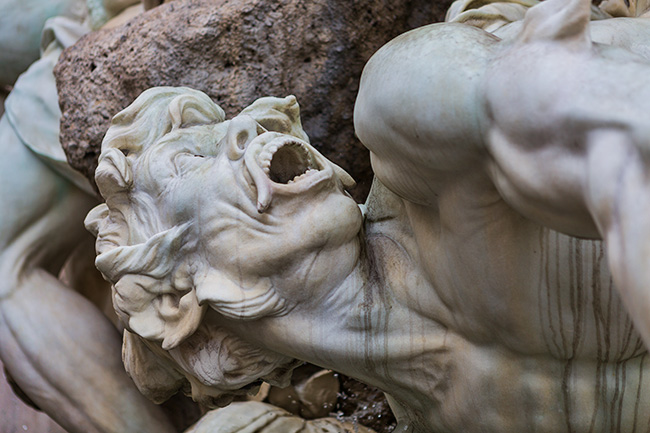 He is ready to strike back! 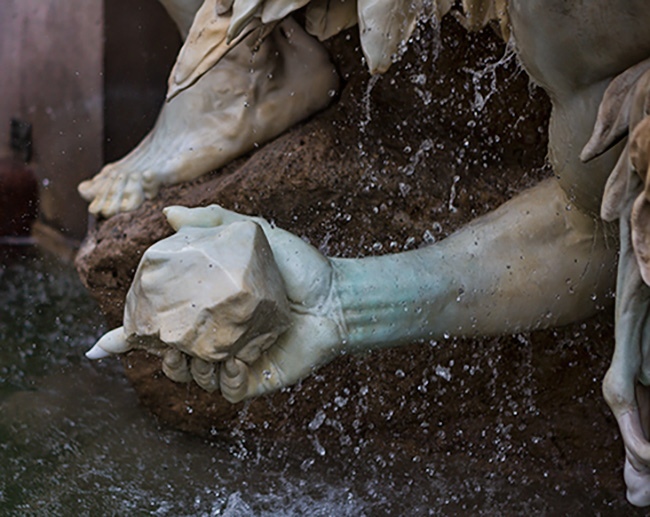 Since he has a piece of rock 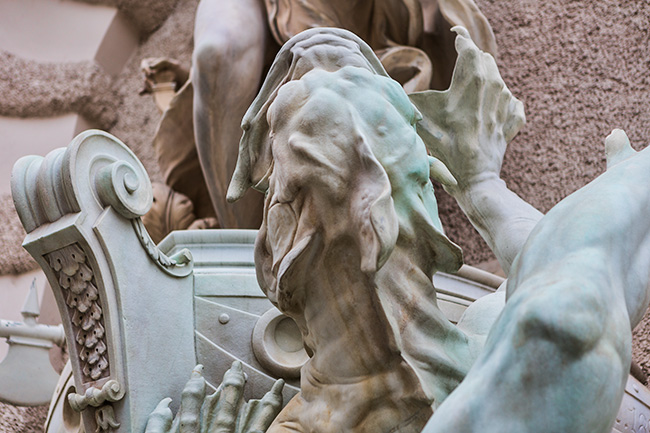 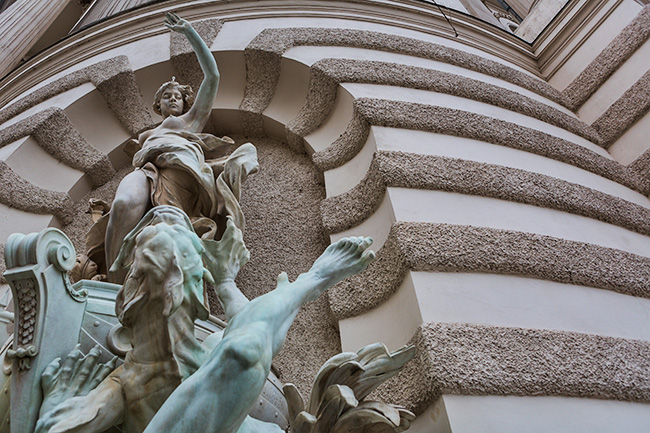 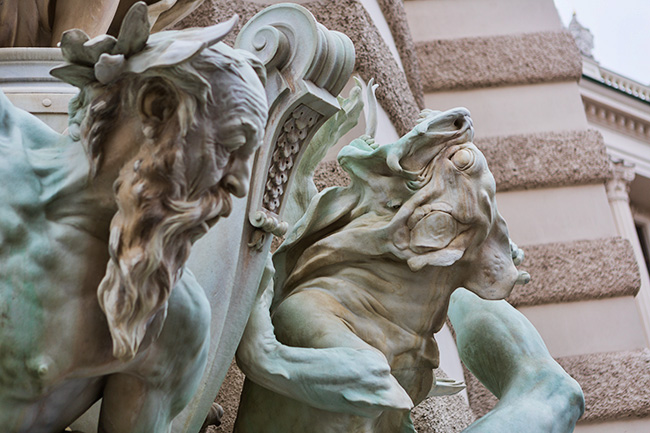 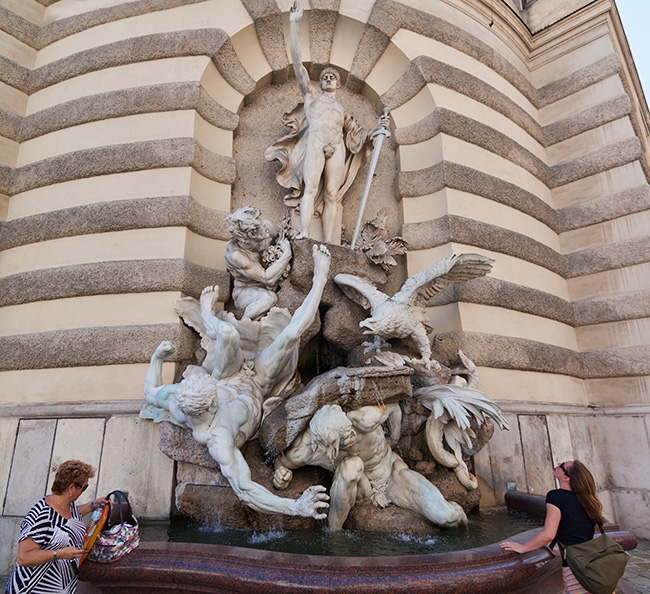 On the right side you find another fountain. The (Austrian) power on land from Edmund Hellmer. He did finish this one in 1897. Fallen Giants, an Eagle, a Snake and a dude with a sword. Well…. 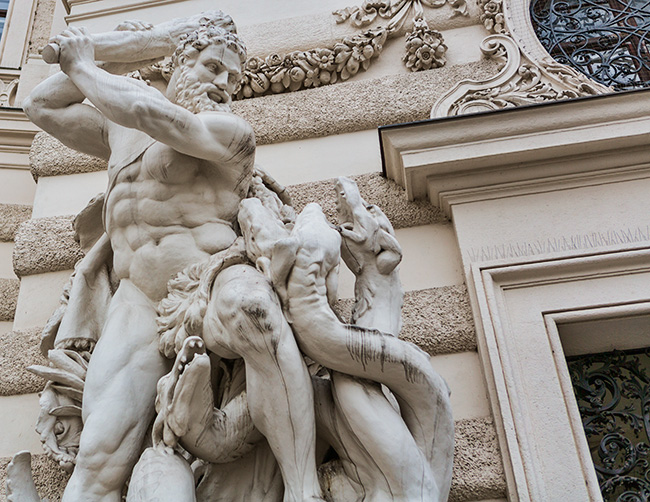 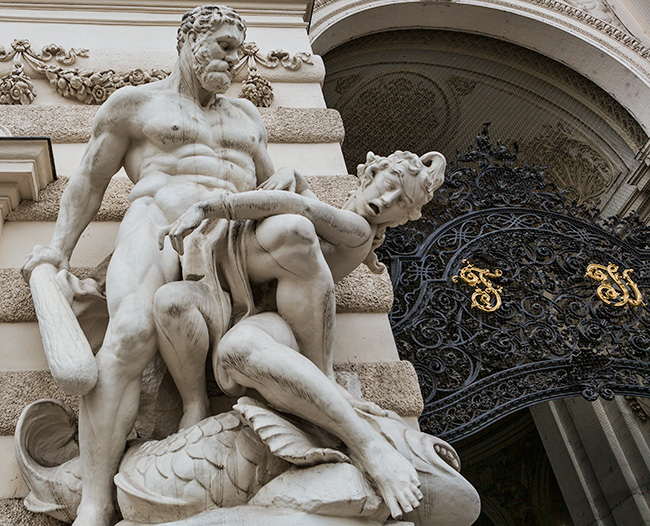 Guess that guy did steal a fish – so now he is in trouble! 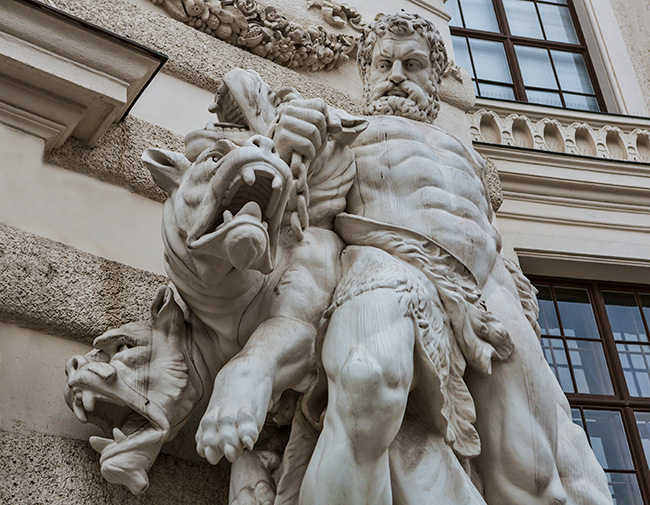 He walks his dogs 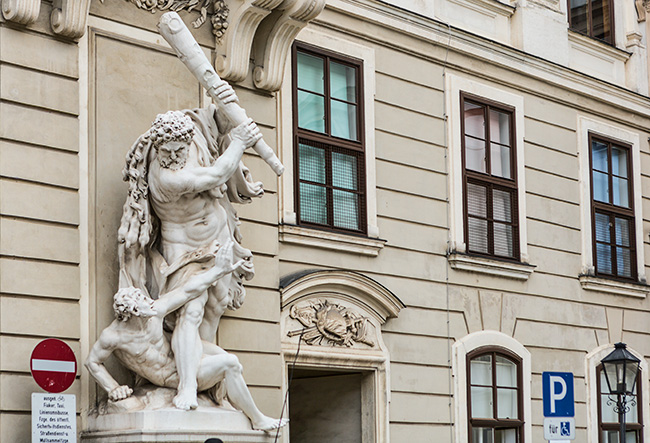 No clue what is going on but it does not look good for the guy on the ground. This is the right side 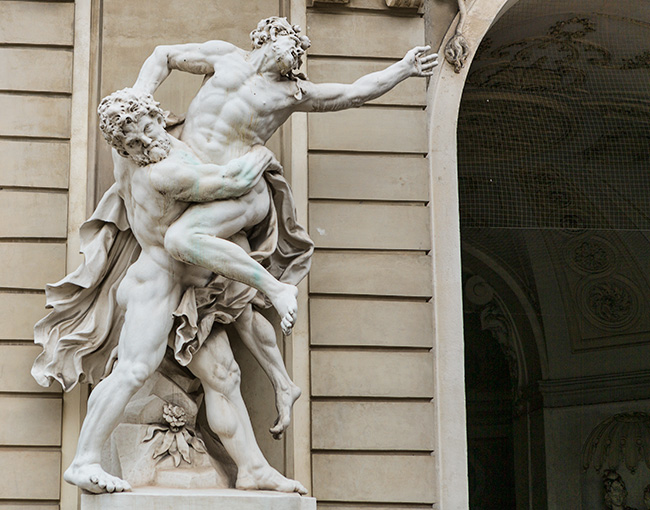 This is on the left side. Could be his father trying to help. To bad but the Giant will not let go! 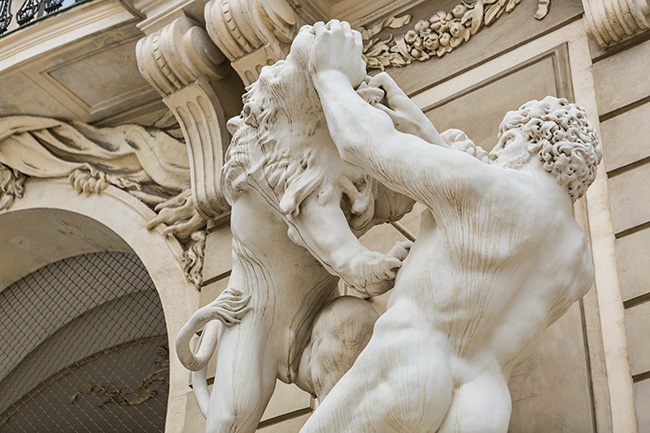 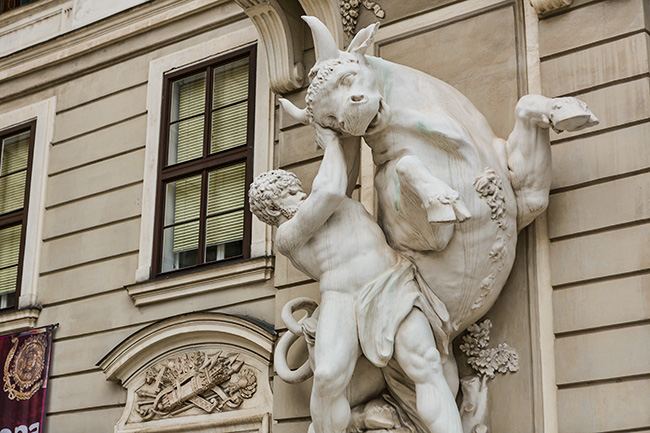 And so does this guy! 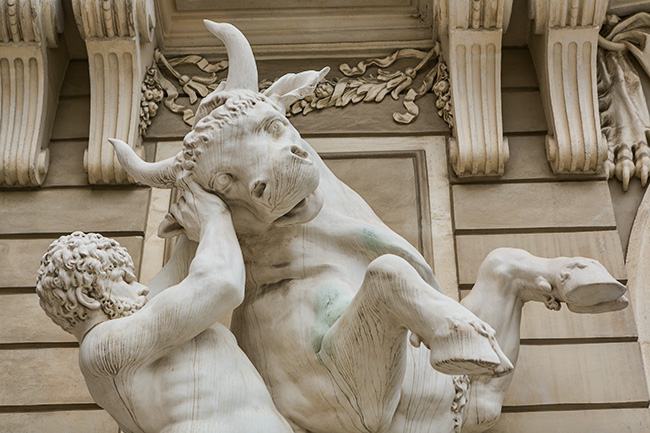 But do not be fooled – he is inspecting an infection in this bulls ear. So he can send him off to Spain where they will kill him slow and painful in the ring. Sad world that is!