Grand Central Terminal is a commuter (and former intercity) railroad terminal at 42nd Street and Park Avenue in Midtown Manhattan. It is the largest train station in the world by the number of platforms, with 44 serving 67 tracks along with them. They are on two levels, with 41 tracks on the upper level and 26 on the lower, though the total number of tracks along with platforms and in rail yards exceeds 100. Every day, more than 750,000 people pass through Grand Central and an estimated 10,000 people come into Grand Central to have lunch – more than 3 times more people than the busiest airport in the world! Still, you will not run into each other and have more space to reach the train as in the modern airports of our time. There are about 22 million visitors per year, making it one of the top attractions of New York. Lots of shops and restaurants on top of that.
All levels, floors, and platforms within Grand Central can be reached by lifts or ramps. It was billed as the first great “stairless” station, a design considered necessary for train passengers with large trunks and train cases. 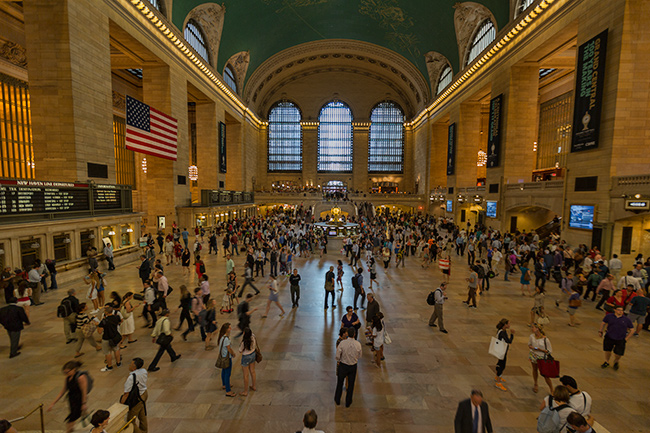 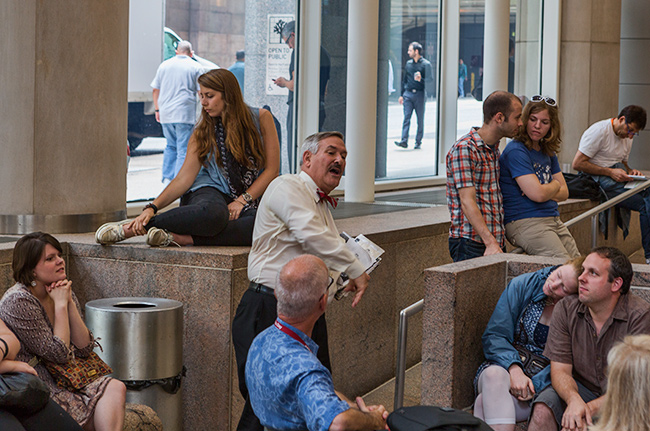 The start of the tour with Justin Ferate, the best tour guide I ever had! Before we went to the Terminal he told us about the people in the city. Rich and poor, how the rich did show their money. How people used to take the trains at that time. The general architecture at the time and so much more. Fascinating stuff that I did not expect since it was a Grand Central Terminal tour. If you are in New York and you do not attend the free Grand Central Terminal tour every Friday at 12:30 pm by Justin Ferate – I can not help you! 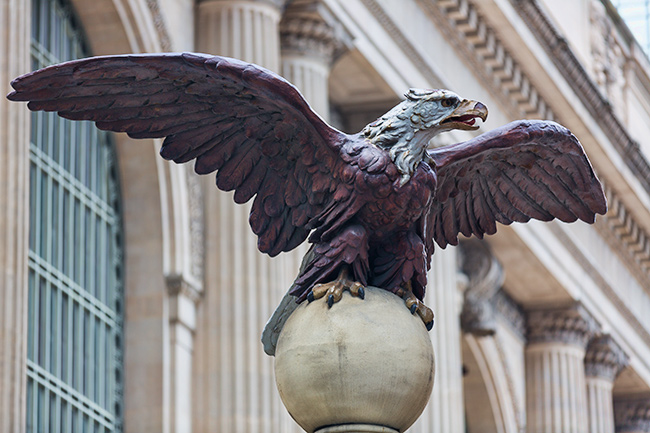 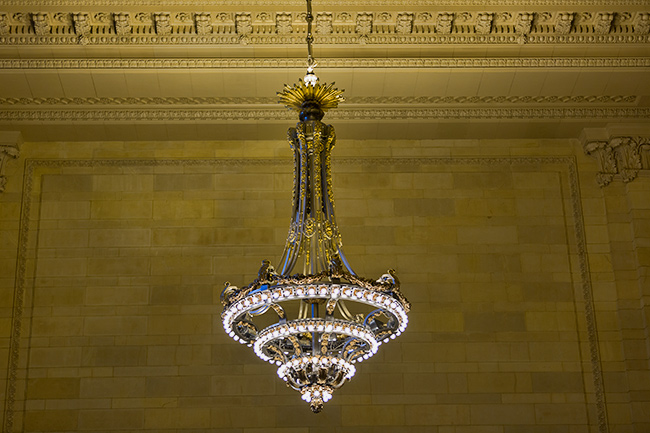 Detail from the Vanderbilt Hall, formerly the main waiting room, now used for special exhibitions and rented for private functions. 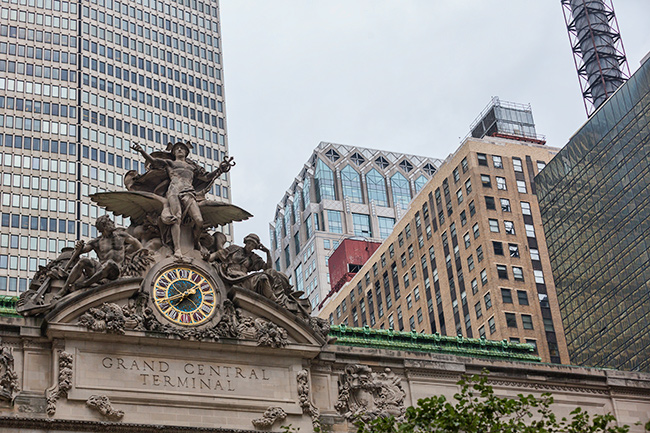 The statues around the clock on Grand Central’s south face represent Mercury, Hercules, and Minerva, all considered apt gods to represent the railroads with their attributes of speed, strength, and intellect. At the time, this was considered the largest group of sculptures in the world, 14.6m high. The French artist Jules-Alexis Coutan was responsible for the design of the sculpture (known as “Transportation”). However, Coutan never visited the US, and the sculptures were carved by the John Donnelly company. 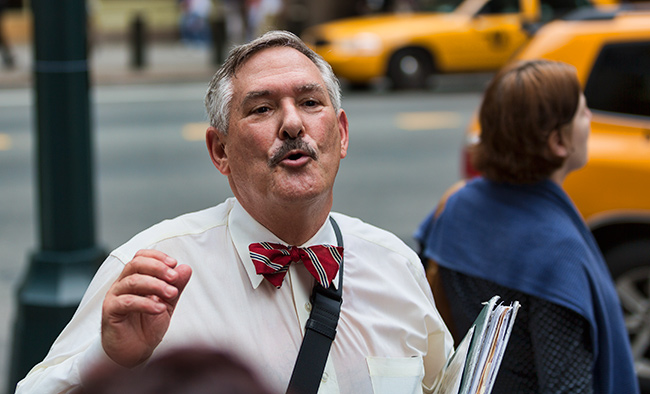 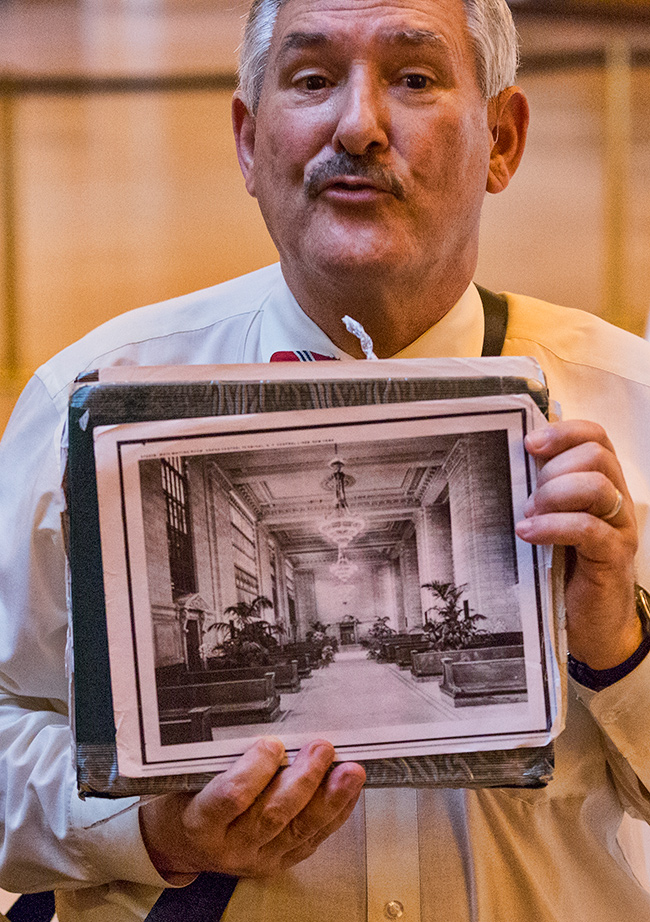 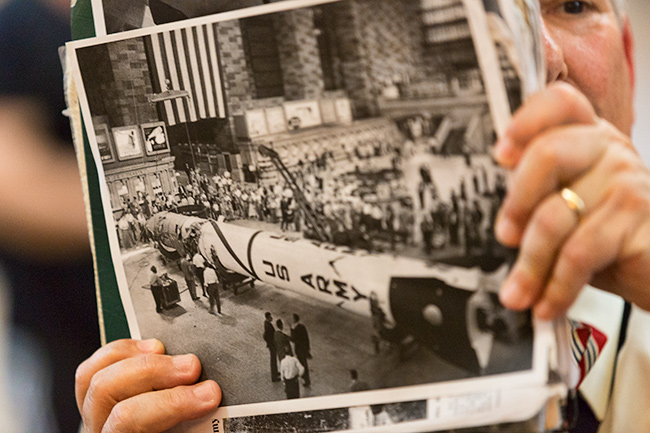 The Redstone missile making a guest appearance in 1957 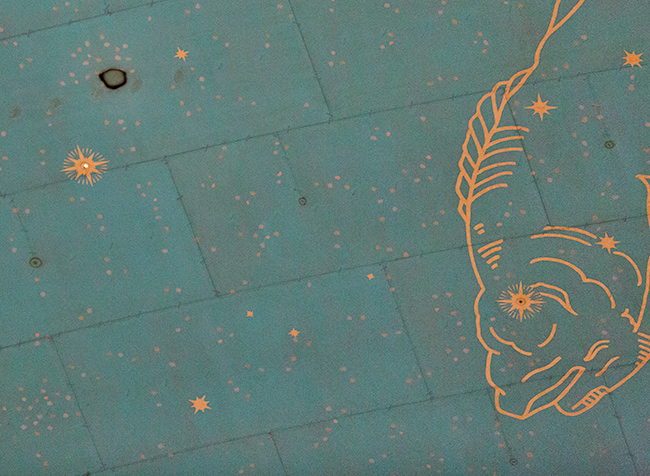 High up on the ceiling mural (above the constellation Cancer) is a small hole, a legacy of a NASA promotion in 1957. With the government trying to drum up support for America’s space program as the Space Race really gathered speed, NASA brought in a rocket to draw attention to their work. A six-inch hole was punched in the ceiling to help support it. When they renovated the ceiling it was decided to keep it there as a reminder. You also see a small part of the astronomical mural on the ceiling of the main concourse, which shows the Mediterranean sky during the October to March zodiac and features 2,500 stars. The stars are slightly displaced, and the sky is actually in reverse. Officials explain that it represented God’s view. However, it seems more likely that workers had mistakenly looked at the diagram on the floor and done their work from there. 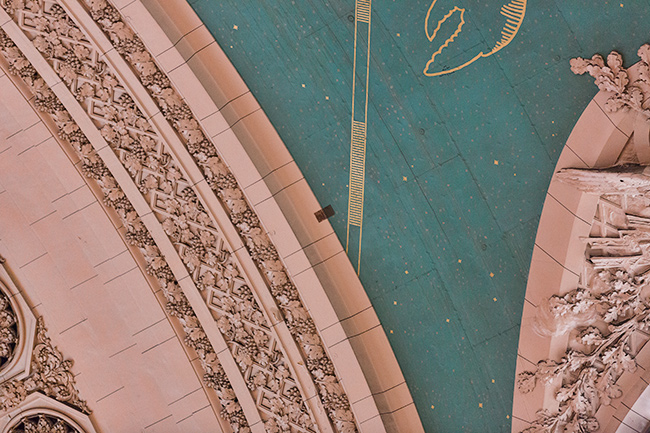 At the renovation, a single dark patch was left above the Michael Jordan Steakhouse to remind visitors of the grime that once covered the ceiling. Spectroscopic examination revealed that it was mostly tar and nicotine from tobacco smoke. 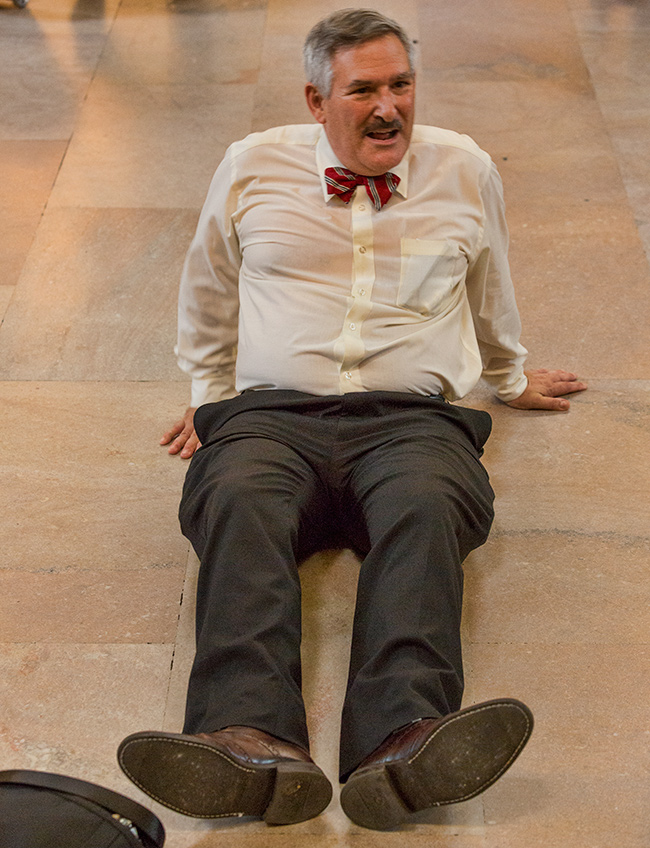 For all the people who pass through Grand Central daily, it makes you wonder why walking here is never a problem. While the amazing design might go largely unappreciated, many of the details make this volume of traffic possible. Mr. Ferate points out that the length of tiles throughout the terminal relate directly to the size of human arms, legs, and hands, making it easy for people to move throughout the area without collisions or other mishaps. 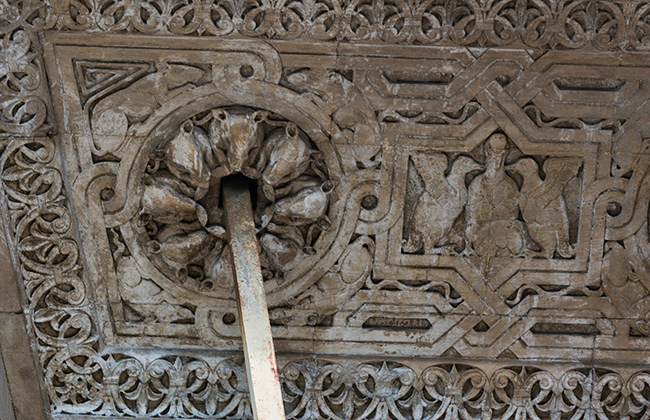 Detail above the door of the Graybar Building at Grand Central Terminal. This could be the rats inside the ship. Meyer Berger said: “The rat-and-hawser motif is there to symbolize a ship and, in turn, a port. The rat on the hawser, baffled by the rat-guard, is trying to get into the ship. The circle of rat heads on the side of the hawser typifies the rats IN the ship. You will see some grasshoppers in the design, too, because, as in the song, ‘Grasshoppers stand upon the railroad track.’ And, too, you will see a number of albatrosses-birds of the sea-carved here and there.” 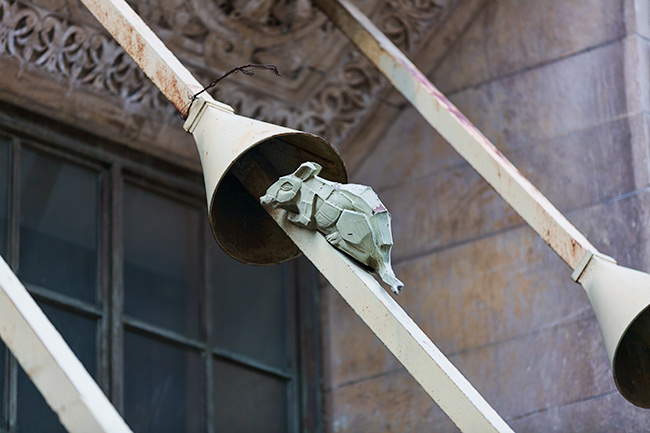 There are three miniature rat sculptures on the canopy’s support rods. The sculpted rats are depicted as if they are climbing the anchor ropes on a ship.